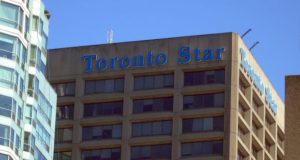 On May 9, 2018 I sent the following media inquiry to Jennifer Yang, the Toronto Star’s Identity and Inequality Reporter, and Kathy English, the Star’s public editor:

You [Yang] wrote in your article regarding Jonathan Halevi:

“He has also been a go-to pundit for the now-defunct Sun News Network and its offshoot Rebel News, a right-wing media website that has drawn controversy for its anti-Muslim coverage.”

“Understanding the sensitivity of the subject matter, the reporters and her editors put an immense amount of thought and consideration into this piece.”

I have recently discovered that Jonathan Halevi sent you an email November 23, 2017 in which he wrote:

He asked you to “correct the biographical information” about him.

Here is the text of Ezra Levant’s statement:

To whom it may concern:

This is to confirm that Jonathan Dahoah Halevi is not and has not been a pundit for The Rebel media. Mr. Halevi was interviewed once by The Rebel in early 2015. He was not hired or paid by The Rebel and did not and does not represent or speak on behalf of us.

If you do not correct/remove the statement would that not be an indication of support for false information (fake news) about Jonathan Halevi even after being notified by Mr. Halevi about it?

One more question. Why did the Toronto Star not mention that Jonathan Halevi appeared several times on CTV as an expert on the Middle East?

Please respond by 11 AM May 10. If you need more time, please let me know.

Neither Jennifer Yang nor Kathy English responded to this media inquiry or corrected the false information they published on Jonathan Halevi.

This is classic #FAKENEWS. Errors are made in articles. A professional corrects them.

Here are links to other articles about The Toronto Star.

Is the Toronto Star Canada’s #FAKENEWS media outlet?
Toronto Star’s “Fake News” Serving “Political Islam”
UPDATED: Toronto Star Downplays Imam’s Anti-Semitic Comments
From the Ethics of the Fathers: “Rabbi Tarfon used to say, it is not incumbent upon you to complete the task, but you are not exempt from undertaking it.”