Two Popes: One defended Catholicism and the Judeo/Christian values

The tale of Two Popes begins when Pope Benedict XVI “resigned.” Healthy as can be, the Pope is alive and well. I wonder what caused this Pope to “retire”?

In 2005, the day before his nomination, then-Cardinal Ratzinger issued a stern warning about moral relativism and ideological currents that had dogged the church over the past decades.

Then in September 2006, Pope Benedict XVI provoked outrage in the Muslim world with a speech given at the University of Regensburg in Germany.

Pope Benedict quoted a 14th Century Christian emperor: “Show me just what Muhammad brought that was new and there you will find things only evil and inhuman, such as his command to spread by the sword the faith he preached.”

Oh dear. That did not go over well in our world of moral and cultural relativism. Or a world where truth is whatever you want it to be. The remarks were interpreted as an attack on Islam and sparked angry protests in Pakistan, India,Turkey and Gaza.

Pakistan’s parliament today unanimously adopted a resolution condemning him for making “derogatory” comments about Islam and seeking an apology from him for hurting the feelings of Muslims.

The resolution, put forward by the hardline MP Fazal Karim, was supported by both government and opposition MPs.

Chaudhry Ameer Hussain, the National Assembly speaker, allowed Mr. Karim to move the resolution after he said the Pope had insulted Islam and the Prophet Muhammad by making “derogatory remarks”

The Muslim leaders in Lebanon, Iran and Syria, Britain and Turkey, the leader of the Muslim Brotherhood in Egypt were none too happy, either. Following Pope Bendict’s 2006 speech not only were moderate Muslims offended, but extremists attacked churches in the West Bank, killed an Italian nun in Somalia, and beheaded a priest in Iraq.

However, the former Archbishop of Canterbury, Lord Carey, came to  Pope Benedict’s defence and said Muslims must learn to enter into dialogue without “crying foul.”

“The Pope is a distinguished scholar and one unlikely to say offensive things.If he quoted something said 600 years ago, we should not assume that this represents the Pope’s beliefs about Islam today.

“Muslims, as well as Christians, must learn to enter into dialogue without crying foul. We live in perilous times, and we must not only separate religion from violence but also not give religious legitimacy to violence in any shape or form.”

Pope Benedict was forced to issue an apology in response to the angry reactions.

“I am deeply sorry for the reactions in some countries to a few passages of my address at the University of Regensburg, which were considered offensive to the sensibility of Muslims.

“These in fact were a quotation from a medieval text, which do not in any way express my personal thought. I hope this serves to appease hearts and to clarify the true meaning of my address, which in its totality was and is an invitation to frank and sincere dialogue, with mutual respect.”

“Regensburg was not so much the work of a professor or even a pope,” wrote Fr. Raymond de Souza in a column for the National Catholic Register, a conservative publication. “It was the work of a prophet.” Benedict’s allies saw those episodes as proving the pope’s point, and they cheered his willingness to “get tough” with Islam. the Wall Street Journal called him “Benedict the Brave.”

On February 10, 2013, Pope Benedict XVI issued the stunning declaration that he intended to resign from his post as head of the Catholic Church at the end of the month.

The move was virtually unprecedented, as every Church head since Gregory XII in the early 15th century had fulfilled his papal duties until death. Benedict cited his advanced age and deteriorating strength as the impetus for his resignation, explaining that his condition had forced him to “recognize my incapacity to adequately fulfill the ministry entrusted to me.”

His views on Islam are different from Pope Benedict.

According to Michael W. Higgins, the distinguished professor of Catholic thought at Sacred Heart University in Fairfield, Conn. Francis may prove to be a great friend to Islam.

After the massacre at Charlie Hebdo January 7, 2015, Pope Francis said, “Curse my mother, expect a punch”, and blamed the cartoonists for their own murder.” Giulio Meotti Cultural Editor for Il Foglio, is an Italian journalist and author wrote “Islamists are winning the ideological battle and we are behaving like cowards.”

Pope Francis takes great care not to use the word “Islamist” when an attack is carried out in the name of Islam, preferring to use “terrorist”. In 2014, he called for Muslim political and religious leaders as well as academics unambiguously to condemn terrorism, a source of Islamophobia. Did you follow that: Islamophobia-the irrational fear of Islam comes from terrorism. Hmmm.  He also puts Christian, Jewish and Muslim fundamentalism on the same level — they are all “deviations.”

How many Christian and Jewish fundamentalists have murdered innocent people lately? How many have called for the murder of others from their pulpits? This is moral relativism; not what I thought was the foundation of Catholicism.   In 2016 Francis declined to “associate Islam with violence” when asked about the murder of French priest Jacques Hamel by two jihadists.

He said, “When I speak of war I speak of wars over interests, money, resources, not religion. All religions want peace, it’s the others who want war.”

January 2016 the Pope invited the Iranian leader, Hassa Rouhani to Rome. In order to accommodate him statues were covered. Nudity not allowed. Yet this man refers to Jews as descendants of pigs and apes calls for death to the Jews, death to Israel and death to the West. Why is the Pope giving him such honour? Who honours those who call for death to others? Would he have invited hitler for a visit?  I ask because Islam and Nazism share the same vile hatred for the Jews.

For Pope Francis, relations between the Catholic world and Islam became a spiritual and political priority. In part this was an effort to continue the strategy of reparation that Benedict, post-Regensburg, had himself initiated. But it was also conceived as a more hands-on, person-to-person undertaking that relegated doctrinal and historical controversies to the side, opting for an encounter of like spirits rather than like minds. He has annually washed the feet of Muslim women on Holy Thursday in imitation of Christ at the Last Supper. 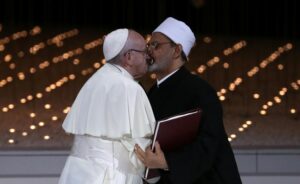 Like spirits and like minds? Catholics have common ground with Islam? In what way? The ethic underpinning Catholicism comes from the Jews 3500 years ago; all people are born with equal intrinsic value, all life is sacred, we are born with free will.

One would think that the leader of the Catholic world would protect and defend the Judeo/Christian ethic and protect and defend all countries that live by it. Where is his defense of Israel against the calls of terror against her? Israel, the home of the ethic. Why is the Pope defending those whose value system is based on dhimmitude; where non-Muslims are second class citizens, if that? Where gays are hanged or thrown off tall buildings?

Pope Francis does not appear to approve of Donald Trump’s Mideast Peace Plan. Francis said that the “unresolved conflict between Israelis and Palestinians, with the danger of inequitable solutions and, hence, a prelude to new crises,” cannot be overlooked. So his answer is what? Appease the Muslims? How much land should Israel give to those who call for her death, who scream “From the river to the sea Palestine will be free?”

In March, 2020, top Fatah official Tawfiq Tirawi, who is a Fatah commissioner and member of its Central Committee, repeated his view that the 1967 borders – which the PA claims it will be content with as “Palestine” – is not the PA goal. All Israeli cities such as “Haifa, Jaffa, Acre,” he says, “Palestine is all of Palestine.”

Appeasement breeds contempt. We have seen that contempt since 1967. No amount of appeasement will appease these Muslims.

The Pope said that the rhetoric of the clash of civilizations serves to justify violence and nurture hatred, and regretted that the failure and weakness of politics, together with factionalism, are leading to forms of radicalism and terrorism.

But there is a clash of civilizations. If the Pope, the leader of one billion Catholics does not see that, who will?

ICNA Canada shares with its members, followers and supporters the book Riyad us Saliheen” where it says

One Pope understood the threat of Islam to Catholicism and Western Culture. He “retired.”