What happens when governments and police fear Islam?

I can tell you what happens when governments and police have an irrational fear of Islam, or Islamophobia. They permit hateful parades targeting the Toronto “Zionist community” and calling for the destruction of the Jewish state, the one and only homeland of the Jewish people

I can tell you what happens when governments and police fear Islam. They permit Jew hating parades, Al Quds, to take place in the heart of the city. 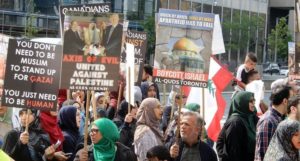 This despite the fact that:

“City spokesman Brad Ross said the city does not condone any rally that “incites hatred or violence” against groups or persons. He added that consistent with council direction, city staff have “reached out” to the Al Quds group regarding the city’s policies and have provided them with a copy of the hate activity policy to ensure compliance.”

They reached out did they? With what? An olive branch?

At that parade an individual was documented holding a sign which refers to the Battle of Khaybar  when the Muslim army, lead by Mohammad, defeated the Jews in the 7th century and later expelled them for ever from the Arabian Peninsula.

Today “Khaybar” is often chanted as a threat against Jews. A reminder of what Muslims want to do to Jews; slaughter many of them in a “Last Khaybar.” 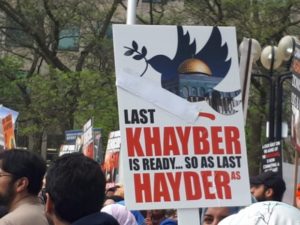 Other participants held signs in support of the Islamic regime of Iran and its proxy Hezbollah which is designated by Canada as a terrorist organization. But that’s OK in Toronto, the capital of Ontario. 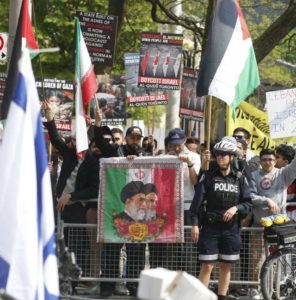 These people were protected despite the fact that they had no permit and had not paid for police protection. And they were aided in the hate fest by the police who cordoned off the people who came to protest the hatred towards “Zionists” and the denial of the right of the Jewish people to self determination on his historical and religious homeland.

The police did all this after they had protected Muslims who called for the destruction of Israel in a counter-protest called Walk Against Israel that followed the people participating in the 50th anniversary of the Walk for Israel, May 20, that was held in the midst of the Jewish community.

On that day Firas Al Najim of the Canadian Defenders for Human Rights drove onto the scene in a cube van emblazoned with a “Walk Against Israel” poster. Not a problem.

Let me repeat that. The police protected Muslims calling for the eradication of Israel in their  Walk Against Israel while they protested the existence of Israel THROUGH the Jewish community. Can you imagine the fear? Jew haters escorted through the largest Jewish community in Canada, protected by the POLICE.

The police allowed anti-semitic groups to walk in the middle of the Jewish community.

How is this any different from the Neo-Nazis chanting “Jews will not replace us!” as they marched through Charlottesville?

Today’s #WalkAgainstIsrael in #Toronto #Canada in the heart of the Criminal Zionist Community. We refused to be intimidated and we came despite the threats to our lives all over social media and despite the cries for Canada to ban me from coming inside the country by the terrorist Jewish Defense League (JDL). Thanks to the organizers for inviting me to lead the march and rally and to everyone that came out to support our just struggle for Palestinian liberation! Free #Palestine! (05-20-2019)

The Walk against Israel was organized by Canadian Defenders for Human Rights (CD4HR) led by Aliya Hasan and Firas Al Najim.

Not only did police officers escort Al Najim, “his supporters and their hateful anti-Israel placards into Clanton Park where they spewed anti-Zionist vitriol without a permit, they accompanied the ragtag group of Israel haters down Bathurst St. (which was closed to traffic) around 5:30 p.m., while they shouted hateful slogans to those attending a family street fair.”

The Canadian Defenders for Human Rights (CD4HR) also took it upon themselves  to define the most extreme orthodox Jewish sect, Neturie Karta, as the only “real Jews” while denying any rights of other Jews in their own homeland.Who are they to tell us who is a Jew?

But that’s OK in Canada. Our PM seems to be OK with this because we all know he tweets when he thinks human rights have been denied.

Now I remember when some people protested outside the Masjid Mosque in downtown Toronto. Didn’t the politicians just freak out and tweet their disgust with protesters OUTSIDE a mosque. The police began an investigation from the hate crimes unit. But not a peep nor a tweet about protesters in the midst of the Jewish community calling for eradication of Israel.No hate crime investigation. No Sir. These people were protected by the police.

Then this past Saturday, the police force sent about 100 officers to protect the Al Quds supporters who occupied city space and block University Ave. without a permit. Across Armoury St. about three dozen members of the Jewish community and the Jewish Defense League were penned into a small area and watched closely by police. Not escorted through the streets as they had escorted those calling for the end of Israel “in the heart of the Criminal Zionist Community.”

The hypocrisy is breath-taking. So is the fear of our esteemed leaders and protectors.  We can smell it on them. They protect those who call for the extermination of Israel as they walk through the Jewish community and do nothing to protect Jews protesting against Al Quds Day that is meant only to call for that extermination.

The #IslamophobiaIndustry at work in our communities.