White Privilege: Who are these people? 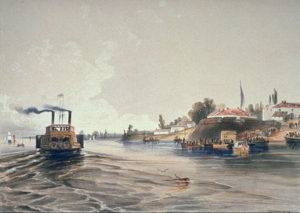 The New World has been populated by millions of people from all over the Old World. Millions were white. Many were poor, starving, uneducated, attacked and often ridiculed at home.

“The population of immigrants born in European countries other than those of the British Isles started to increase in the late 1800s, slowly at first and then more rapidly, peaking in the 1970s. The first wave began in the late 1800s and early 1900s, with the arrival of new groups of immigrants from Eastern Europe (Russians, Polish and Ukrainians), Western Europe and Scandinavia.

A second immigration boom following World War II continued to favour immigration from the British Isles, but a significant number of immigrants also arrived from Western Europe (Germany and the Netherlands) and Southern Europe (Italy, Greece, Yugoslavia and Portugal) from the 1950s to the 1970s. At the time of the 1971 Census, 28.3% of immigrants were born in the United Kingdom and 51.4% were born in another European country.”

Ukrainian immigrants make up one of the largest groups to come to Canada. Poor and starving at home, the peasantry had been harassed and abused by Russian soldiers posted throughout the Ukraine and kept in a state of third-world poverty compounded by a drought and a famine. 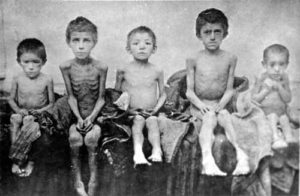 Ukraine in the grips of famine, oppression and economic collapse.

They were mostly farmers, and Canada needed hardy farming settlers to build the West.  At first a few thousand men, woman and children, most of whom had nothing but the clothes on their back, no education and very little money, were sent by train to the plains of Saskatchewan and Alberta where  they were given two draft horses and a cart each, along with some basic farming tools and food supplies, and shown their plot of land. Sounded great but was often nothing more than a barren desert or a large plot of forest that had to be cleared.But the land was ploughed and planted.

More Ukrainians arrived during the Great Depression, a dismal time to arrive looking for a better life, but eventually found work in industry, forestry and mining, with most of them settling in Ontario.

The Ukrainian-Canadians make up 10% of the country’s population.

The Irish, often called Micks, arrived during the first half of the 19th century. By the 1850s,more than 500,000 Irish had immigrated to British North America,

Many Irish immigrants landed in Newfoundland where they worked as fishermen and lived in the kind of dire poverty they had hoped to escape when they left the Old World. In the middle of the 19th century the Irish provided cheap labour in the cities, as well as working on the many public construction projects underway at that time.

The Great Famine of the late 1840s drove 1.5 to 2 million destitute Irish out of Ireland. 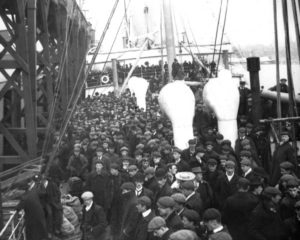 These immigrants arrived in large numbers and in poor physical condition, coming over in what has been described as “Coffin ships.”  They took this trip in order to  be free of British oppression.

More than 38 000 migrants escaping the Irish Potato Famine landed on the city’s waterfront. The sheer number of poor and often ill immigrants strained local resources. Initially the refugees landed on a wharf near the present-day site of the Metro Toronto Convention Centre. Eleven hundred died from typhus or other illnesses.

Those who survived  supplied cheap labour that helped fuel the economic expansion of the 1850’s and 1860’s. They were poor and resented because of  the urban and rural squalor in which they were forced to live.The hostility toward the Irish was widespread.

In 1858 a Globe columnist described the Irish as “lazy, improvident and unthankful; they fill our poor houses and our prisons.”

In the 20th century there were signs that read “no Irish need apply.”

Jewish refugees tried to come to Canada and the USA prior to the Shoah.  The Jewish people are not white; rather they come in many colours and races and 90% can trace their DNA to the Levant.Those who made it to these shores, many penniless, were grateful to be out of Europe and Russia. Russian Jews emigrated seeking relief from ghetto life and the pogroms of western Russia. My father arrived when he was thirteen. He had witnessed the death of a young boy during one of the many pogroms in his village. My mother was first generation Canadian. She was told by her high school teacher to change her name so she could get work. Her name was too Jewish.

Canada was rife with anti-Semitism in the ‘30s and ‘40s. Some swimming pools in Toronto had signs “No Dogs or Jews Allowed;” tensions exploded in the Christie Pits riots of 1933; and in a 1946 Gallup poll, well after the horrors of Auschwitz were widely known, Canadians were asked to make a list of undesirable immigrants. Jews finished in second place, behind the Japanese who had attacked Pearl Harbour, as the least desirable immigrants.In cottage country, and even on Toronto’s beaches up to the mid-1950s, it was common to see signs that read “No Dogs or Jews Allowed.” 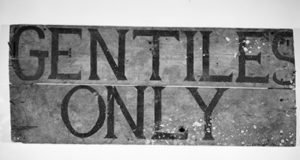 Most of the early immigrants from Russia were peasants who found work in various industries. After WWI many of the one million Russians (the majority of them agricultural and industrial labourers) fleeing the effects of the Russian Revolution sought admission to Canada to work as farm labourers, loggers and miners.

The 6 discernable waves of Polish immigration to Canada were from 1854-1901, 1902-15, 1916-39, 1944-56, 1957-79 and 1980-93.  Hardworking, religious peasants, many received land grants from the government or bought lots in Manitoba, Saskatchewan and Alberta, where they built farms. Others worked on railway construction or in the coal mines. The second generation very often moved to larger settlements or towns, where they opened small businesses.

These are just some of the white “privileged” people who came to Canada and America. Their privilege: getting out of their old world countries with the promise of freedom in the New World. Coming to this new place with gratitude and hope.  What they did not pack in their bags were victimhood or entitlement.