On May 16 Firas (Hussaini) Al Najim is the co-manager of Canadian Defenders For Human Rights (CD4HR), a pro-Palestinian Canadian registered non for profit organization (NO.1067715-9) used a loudspeaker to recite the Islamic call to prayer (adhan) outside the Jaffari Islamic Centre located at 9000 Bathurst Street in Thornhill, ON. Al Najim shared antisemitic tropes, called Muslims to follow the religious duty of refraining from any business transaction with Zionists and called for the end of Israel.

He shared these thoughts in the middle of a diverse neighbourhood, including Jews with a nearby Yeshiva(religious school), You can read the entire speech here.

We are here today, it is May 16, 2020. It is Saturday and it is also the 23rd night of Ramadan. It is called the powerful night, Laylat al-Qadr. It is a very heavy night. It is a very powerful night. This night is a better than a thousand years. This is what the Quran says… We thank the City of Vaughan for giving the permission to call the prayer of adhan during this corona virus and the crisis that hits the global world. We want to speak also about an important fact. We need to pray for the Palestinian people in the holy land. And this centre here [Jaffari Islamic Centre], the majority of the followers, they follow Ali al-Husayni al-Sistani, Ayatollah al-Sistani… And he [Sistani] is totally against the occupation of Palestine, he [Sistani] is against the illegitimate Zionist regime. He [Sistani] calls for the liberation the holy Palestine and also for boycotting all the Zionist businesses. He said that it is illegal it is forbidden for any Muslim, especially the followers that follow him, to do any business transaction with any Zionist business,

The first response by the Jaffari Centre came from the Islamic Shia Ithna-Asheri Jamaat  Vice President, Shafiq Ebrahim, who said “The individual came to our premises without our authorization and we did not request nor allow this recording to occur.” What? This is their initial response to that speech?

If someone stood on my driveway with a loudspeaker sharing hate for people in my neighbourhood, the first thing I would do is call the police and have him charged with trespassing. The second thing I would do is apologize to my neighbours for the horrible things said and tell them that I would make sure nothing like this would happen again.

Yet, the Centre did nothing until May 17, when Gila Martow, the MPP for the area issued a statement saying it was “unfortunate” that Al Najim “would use a prayer for victims of COVID-19 to promote intolerance and misinformation about international legal issues.” Martow said she hopes his message of “intolerance and misinformation is not shared by the membership and families of the Jaffari Centre. I look forward to meaningful dialogue with them in the near future.”

Well, how dare she say such a thing without first contacting the Centre to find out that they did not know “The individual” who had stood on their property? Yet they knew of him. He identified himself at the end of the video and they should have condemned him and his organization for attacks on the “Zionist” community.

Instead, attacks began on Gila Martow.

The Centre released a statement that they were “deeply concerned” with Martow’s press release, “which cast speculative insinuations about the Jaffari community.” Had Martow “taken the time to contact the [centre], she would have learned that the individual came onto the premises without authorization.” What difference does that make? Does it change the fact that a well-known, respected Muslim, co-manager of Canadian Defenders For Human Rights (CD4HR), stood on their property and screeched evil?

I wonder if Motion 103 which  called on the government to condemn Islamophobia and all forms of racism has affected the response of Muslim leaders. The definition of Islamophobia: “Includ(ing) racism, stereotypes, prejudice, fear or acts of hostility directed towards individual Muslims or followers of Islam in general. In addition to individual acts of intolerance and racial proﬁling, Islamophobia can lead to viewing and treating Muslims as a greater security threat on an institutional, systemic and societal level.”

Have some leaders in the Muslim community taken that definition to mean that no one can be critical about Islamic values? That this definition gives them the right to flip everything on its head and blame the messenger for having the audacity to complain about the spewing of hate by  some Muslims against the Jews rather than commenting on the hate, itself?

The day after that, Mustafa Farooq, CEO the National Council of Canadian Muslims (NCCM), a watchdog group against Islamophobia, said Martow should have undertaken the “appropriate diligence that a reasonable person would have expected by actually calling the Jaffari Centre…Putting out a press release without getting all the facts straight – and without even endeavouring to do so – is simply unacceptable.”

The NCCM called on Martow to apologize for her “problematic” press release, and to issue “a clarifying statement.”

All of a sudden the vitriolic screed that was shared is not important. No. What matters is that Ms. Martow did not contact them before sharing her “problematic” press release  and had to apologize, and issue “a clarifying statement” for their hurt feelings.

In a statement May 19, Ms. Martow, Conservative MPP for Thornhill, apologized for “any hurt she caused to the community of the Jaffari Community Centre.” In a joint statement she thanked representatives of the NCCM and ISIJ “for their understanding and willingness to confront intolerance.” She also said she would contact organizations directly “should any further unfortunate incidents occur.”

All three parties “will continue to engage in productive dialogue and continue to demonstrate to all communities that we are stronger when united,” the joint statement said.

All agreed to confront intolerance.

NCCM and ISIJ (Islamic Shia Ithna-Asheri Jamaat)-The Jaffari Centre “wish to reaffirm their commitment to stand against all forms of discrimination, including antisemitism, as they stand with their Jewish brothers and sisters against intolerance.”

That’s it? This is their idea of a stance against Jew hatred from the parking lot of a Mosque?

This attack on Ms. Martow is a great deflection by the #IslamophobiaIndustry. Muslims were not attacked in any way, yet the conversation has been deflected from hate against the Jews and Israel in the parking lot of a Mosque, to the hurt feelings of the Muslim community because of a statement made by the MPP of all the citizens after an antisemitic attack.

I have still not heard a word of apology from anyone about the bile that was spewed.

Forget the leaders of the mosque and NCCM; not a word from Premier Ford our PM, Justin Trudeau or the mayor of Vaughan, Maurizio Bevilacqua. Nothing. Although our PM has had time to talk about Ramadan.

Today across the country and around the world, Muslims are celebrating Eid al-Fitr and marking the end of Ramadan. To all the Muslim Canadians who are carrying out traditions at home and getting together online, I’m wishing you the very best. Eid Mubarak! https://bit.ly/2TxQuH0

We heard from politicians during the Hijab hoax. A young Muslim girl said a man attacked her and cut her hijab. Without a moment of investigation there was a news conference and all the politicians shared their concerns about Islamophobia-the irrational fear of Islam that leads to these attacks. Then it was announced that it was a hoax. Didn’t matter. The conversation continued about the need to be vigilant regarding Islamophobia.

At that time Karen Mock, an educational psychologist and human rights consultant who chaired the committee that developed the Ontario government’s hate crime strategy stated “These things do get blown out of proportion when it’s a marginalized or racialized group…I think the most important thing to get across is the number of actual hate crimes every year far outweighs the false reports.”

Hate crimes? Was this attack from the parking lot of the Jaffari Centre NOT a hate crime? Where is Karen Mock?  If this is not a hate crime, what is?

But wait.  According to Al Najim, he knows the leadership of the Centre and they know him. May 20, Al Nasim tweeted that the Jaffari Centre “lied.”

UNFORTUNATELY @isijoftoronto @JaffariCC Administration have lied & dissociated from our manager @Islamic_HR [Firas Al Najim] out of fear of the #Zionist politician @GilaMartow & the zionist influential bullying network. Al Najim had permission & is embedded in the community. DETAILED RELEASE SOON 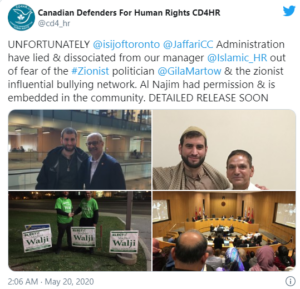 Al Najim had permission? He is embedded in the community? Who’s lying, here? Have NCCM  and the Jaffari Centre apologized to Ms. Martow for insisting on an apology from her before verifying the facts?

In the meantime, we are left with a sense that the Jaffari Centre and NCCM are more upset about the feelings of the Muslims in the community rather than being bloody angry about the hate crime committed by Al Najim during the Ramadan Adhan Call to Prayer, in the holiest month of the year.

I reported this as a hate crime to the York Regional Police and I have confidence that they will do their due diligence.

I did send media inquiries before writing this article. I heard nothing.

UNFORTUNATELY @isijoftoronto @JaffariCC Administration have lied & dissociated from our manager @Islamic_HR out of fear of the #Zionist politician @GilaMartow & the zionist influential bullying network. Al Najim had permission & is embedded in the community. DETAILED RELEASE SOON [https://twitter.com/cd4_hr/status/1262987967234179072]

In light of on the new information revealed by Canadadocs and Firas Al-Najim’s statement, does NCCM plan to retract its statements and allegations against MPP Gila Martow?

Firas Al-Najim said that the majority of the members of the Jaffari Centre follow Ali Sistani and Sayyid Mohammad Rizvi is his representative in Canada.

You can learn more about Al Najim and his organization – Canadian Defenders For Human Rights (CD4HR), here.