Why do Nancy Pelosi and the Democrats Defend Nazi themes shared by Omar?

“Israel has hypnotized the world. May Allah awaken the people and help them see the evil doings of Israel.”

Why do Nancy Pelosi and the Democrats Defend Nazi themes shared by Omar?

Yes, I meant what I asked. Why do Nancy Pelosi and the Democrats defend Nazi themes? Jew hatred comes to mind. From Islam. The same Jew hatred promoted by Hitler. And why not. Hitler loved Islam and the Muslims appreciated his love for them.

In 1941, the Wehrmacht distributed the military handbook Der Islam to train the troops to behave correctly towards Muslim populations.

Heinrich Himmler: “What is there to separate the Muslims in Europe and around the world from us Germans? We have common aims. There is no more solid basis for cooperation than common aims and common ideals. For 200 years, Germany has not had the slightest conflict with Islam.”

Islam for hitler was a Männerreligion; a religion of men; and hygienic too. Islam, he claimed, was much more suited to the ‘Germanic temperament’ than the Jewish filth and priestly twaddle” of Christianity.

And his wishes were answered. Islam carried on with his call.

“Oh Allah, accept our martyrs in the highest heavens…
Oh Allah, show the Jews a black day…
Oh Allah, annihilate the Jews and their supporters…
Oh Allah, raise the flag of Jihad across the land.”

“Our battle with World Jewry … is a question of life and death. It is a battle between two conflicting faiths, each of which can exist only on the ruins of the other.” 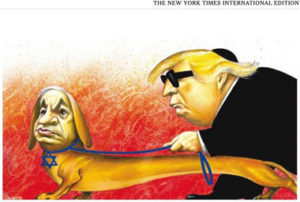 Yet, here is Pelosi with her Democrat cohorts, young and old, saying little to nothing about the latest “outbreak” of Jew hatred in the Democrat Party, this time from Islam as shared by Ilhan Omar, Pelosi’s BFF. Pity there is no vaccination to prevent this illness. 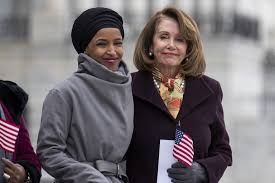 The Democrats “explain” Omar. She’s just ignorant of the facts. Or just plain ignorant. Or, my favourite; she’s just been misunderstood.   She didn’t REALLY mean what she tweeted/said/wrote.

But she knows exactly what she is saying and she is not misunderstood. You may ask how I know this. Because she wears a hijab. She is a religious Muslim. And good for her. Nothing wrong with being religious. Her religion teaches her total disdain for the Jews and now Israel. She has been raised bathed and swaddled in hate for the other, as has  Rashida Tlaib. She has been taught that Muslims are superior to non-Muslims. She repeats this every day on her Al Fatiha prayer.

So why would Democrats-the inclusive, tolerant people, defenders of the underdogs, defend her? This does not take the mind of a rocket scientist. She hates Trump. And the enemy of my enemy is my friend. Right? Wrong. The enemy of your enemy is using you. Omar hates Trump because he supports Israel and the Jewish people. Like many others before the 2016 election, Omar probably believed that Trump was an anti-Semite. The media said so over and over and over. It must be true! But it wasn’t and isn’t. The Fake News media lied-or more gently, misread Trump.

Omar hates Trump for his call to protect and defend Israel as the Jewish state, the only Jewish state, and the only democratic state in the Middle East and North Africa. Israel is surrounded by 23 Muslim only states, like Somalia, which have no concept of tolerance, accommodation or inclusion. How many churches are there in Iran or Saudi Arabia, or Turkey for that matter? And Israel, with 7 million Jews is surrounded by 230 million Muslims raised on the same “ethic” as Omar.

The Democrats, in 2019, have chosen to defend the Jew hating Omar-and she is not the only Jew hater they support-because Omar hates Trump. Period. By supporting and defending and justifying her, they are supporting Jew hatred. They have become the party of Jew haters. And the Democrats are committing the same crime of millions of people in America and around the world during the time of the rise of Nazism-wilful blindness; an ignorantia affectata.

I am the mother of three children and the grandmother of nine, six of whom live in America. I am appalled by the Democrats.

Never Again!  they say so righteously! Democrats-it IS again. And it is YOU!