Many of us in the Jewish diaspora have been watching as antisemitism rises to new levels of vitriol. This isn’t quiet antisemitism. This is loud and proud” Kill the Jews, eliminate Israel.” And now from a respected American as reported in Truth Revolt  “Retired United States Army Colonel Lawrence Wilkerson and the former chief of staff to Colin Powell when he was secretary of state stated that Jews pose the biggest threat to Christians in the Middle East.”

This is scapegoating writ large. And sadly reminiscent of the events prior to WW II and the Holocaust.The table must be set for hate. 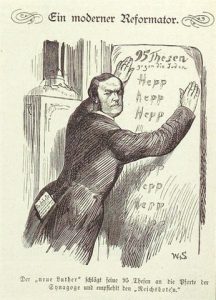 revenge against the Jews who are living among us and who are increasing like locusts.”

In universities in the 1880’s the cry was heard, “The Jews are our misfortune.” In the fall of 1880, the Anti-Semites petition was circulated by two school teachers depicting the Jews as exploitative masters, who would destroy the German fatherland. “Jews are alien people.”

University professors joined in.. Eugene Karl Duhring (1833–1921), a philosopher and economist at the University of Berlin wrote The Jewish Question as a Racial, Moral and Cultural Question in 1877

In 1892, all the rhetoric and ranting turned the Conservative Party in Germany toward anti-Semitism as a political tool to win elections. Anti-Semitism was given the imprimatur of rationality. “We fight the multifarious and obtrusive Jewish influence that decomposes our people’s life.” 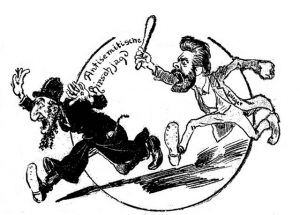 By the beginning of the 20th century, each year “tens of thousands of anti-Semitic pamphlets were sent free to all officials of the state and members of the upper ten thousand.” They were in every library. By the 1920’s, there were approximately 430 anti-Semitic associations and societies, including the List Society, the Austrian Alpine Association, The German Language Club, the German Social Party, and the Thule Society. There were 700 anti-Semitic periodicals. Anti-Semitic bills were introduced into state and national legislatures. Anti-Semitism was in the printed word, in speeches, and in music. 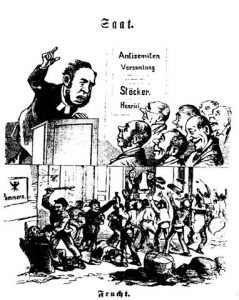 (PHOTO “Seed and fruit”After the outbreak of antisemitic violence and the incendiary attack on the synagogue in the small town of Neustettin in Pommerania in 1881, a cartoon in a North German newspaper presented Stoecker’s speeches as the seed, which results in violence against Jews.)

The free world remained vigilant following the Holocaust in its silence about killing Jews. There was embarrassment by some. But there was a tacit agreement that attacks against Jews would end.

This hatred has been building up over time with constant reinforcement from professors, pundits and politicians as happened in Germany.

Antisemitism is at an all-time high.

“(A)nti-Semitic activity from January – June 2016 on more than 100 public and private colleges and universities with the largest Jewish undergraduate populations, found that 287 anti-Semitic incidents occurred at 64 schools during that time period, reflecting a 45% increase from the 198 incidents reported in the first six months of 2015.”

In churches and mosques the hate is taught.

The Anglican Church in Britain with its Raising Voices: Holy Sites the Pentecostal Appeal regarding social justice promotes the view that Israel is an apartheid state and is eradicating the history of the Arabs

Members of the Mennonite Church USA voted overwhelmingly to condemn Israel’s military occupation and to support divestment from companies that profit from violations of Palestinian rights.

The Presbyterian Church USA passed a series of resolutions at its general assembly in support of the Boycott, Divestment and Sanctions (BDS) movement against Israel, while calling on Israel to leave the disputed territories. The report says that Israel’s “policy trajectory of continued settlements and brutal occupation” is “deeply troubling.”

The Church of Scotland has undertaken a review of its investment strategy to ensure it’s not inadvertently encouraging or funding the continuation of the Israeli Occupation.

At The United Church of Canada “The council, which sets policy for the church, passed a resolution in favour of “initiating and developing a program of education and advocacy in co-operation with our partners, related to divestment from and economic sanctions against all corporations and institutions complicit in and benefiting from the illegal occupation. This would include education about tourism, which bolsters the oppression of Palestinians.”

The Latin Patriarchate of Jerusalem released a statement signed by the heads of all 13 Christian communities in Jerusalem, condemning the recent escalation of violence at the Temple Mount  where Arab Muslims from inside their “Holy Site” ambushed and murdered two Israeli Border police.

“We, the Heads of Churches in Jerusalem, express our serious concern regarding recent escalation in violent developments around Haram ash-Sharif and our grief for the loss of human life and strongly condemn any act of violence.”

They separated the Temple Mount from its Jewish history.

Author, journalist, Giulio Meotti has written about the behaviour of Pope Francis in Gatestone “The Pope called Mahmoud Abbas an “angel of peace.”    Pope Francis then accepted an invitation to visit — along with Muhammad Ahmad Hussein, the Grand Mufti of Jerusalem — the Temple Mount, Judaism’s most sacred site also the third holiest site in Islam, after Mecca and Medina. But this is the same Palestinian Mufti who justifies terrorism against the Israelis by saying, among other inflammatory declarations, that ‘the Hour of Resurrection will not come until you fight the Jews.’  In May 2015, on “Naqba Day” (“Catastrophe Day”), commemorating the day of Israel’s birth, when five Arab countries launched a war against Israel to wipe it out in its cradle, but lost the war — Pope Francis gave the Palestinians another symbolic victory by signing the treaty which formally recognized a “State of Palestine.”

Islam has spread Jew hatred from the day Muhammad went up to Medina from Mecca. Today Imams around the world preach hadiths [the deeds and sayings of the Prophet Muhammad], like these, taken literally by hardline Muslims, that order the need for jihad against infidels:

There are verses in the Quran that state:

And kill them wherever you overtake them and expel them from wherever they have expelled you, and fitnah is worse than killing. And do not fight them at al-Masjid al- Haram until they fight you there. But if they fight you, then kill them. Such is the recompense of the disbelievers. (Quran 2:191-193)

And then there is the media.

From Israel National News: Lord Michael Grade, who was chairman of the BBC from 2004 to 2006, lamented that much of the media today feeds false narratives about the Jewish state, while anti-Semites use Zionism and Zionists as a proxy for attacking Judaism and Jews.

“Zionism is the right of the Jewish people to self-determination, and is right at the heart of the Balfour Declaration. However, sadly, the term Zionist and Zionism has in some quarters become a proxy for anti-Semitism.”

The CBC has shown an anti-Israel bias in its reports over the years.There are constant calls to the  editor-in-chief, Jennifer McGuire from Mike Fegelman of HonestReporting Canada to retract.

The National Review has shown that media bias by omission of pertinent facts paints Israel as the aggressor.

Richard Behar wrote a stunning rebuke of the NY Times in Forbes following Operation Protective Edge in 2014. According to Gary Weiss,  one of the world’s top business investigative reporters:

“We’re not just talking bad journalism. We’re talking about journalism that functions as a tool of a terrorist organization, Hamas: breathlessly pushing its narrative, whether cowed by its threats, sympathetic to its cause, or simply ignorant.”

An in-depth study reported in The Atlantic stated that journalists align themselves with “activists and international staffers from the UN and the NGOs; the Western diplomatic corps, particularly in East Jerusalem; and foreign reporters… In these circles…a distaste for Israel has come to be something between an acceptable prejudice and a prerequisite for entry…  a belief that to some extent the Jews of Israel are a symbol of the world’s ills, particularly those connected to nationalism, militarism, colonialism, and racism—an idea quickly becoming one of the central elements of the ‘progressive’ Western zeitgeist, spreading from the European left to American college campuses and intellectuals, including journalists. In this social group, this sentiment is translated into editorial decisions made by individual reporters and editors covering Israel, and this, in turn, gives such thinking the means of mass self-replication.

And then, today, we have social media which can share this information around the world in a nano second.

Go back and read what happened over time in Germany.