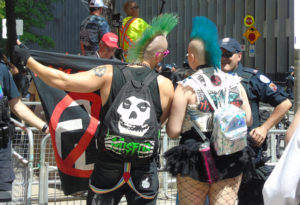 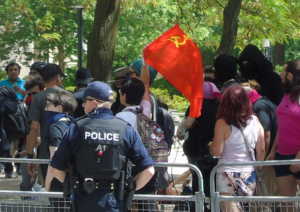 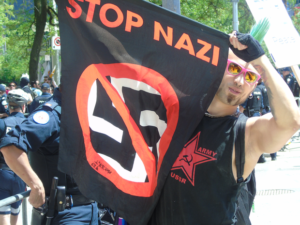 “Don’t let Western civilization—the best and most humane form of civilization developed by mankind—perish by default.”

On June 22, 2019 concerned citizens from PEGIDA Canada gathered to call for rights for gay people in Islam. Canada believes in tolerance, accommodation, inclusion and diversity, yet gay Muslims do not have the same freedoms as all others in the gay community.

The citizens involved had called for a rally at 2 pm, University and Armoury in Toronto.  Before that, at 1pm, there was a “flash demo” at Queens Park. According to people there “it was great, no opposition, people listened. Our rally was good, aside from the noise, and the police cleared the opposition away so we could speak to the street.”

Trouble started on the way to the rally from Queen’s Park. People were attacked by antifascists.

Perhaps they came because of this call on social media attacking PEGIDA as anti-gay.

Think of the irony; a mob of people who call themselves  antifascists attacking people calling for gay rights in the Muslim communities. People promoting the Canadian values so cherished by Justin Trudeau; inclusion, accommodation and tolerance, were attacked by the very people who claim they care about the gay community.

After the rally these antifascists followed the supporters into a restaurant, St Louis Bar and Grill, in the Atrium on Bay, where they sat down beside them. The manager, apparently concerned about their presence, told them to leave and they cursed and swore as they left. Approximately fifty “antifascists” stood outside the restaurant windows. One of the “activists” had stolen a hat from a supporter which he happily displayed.

Rishav Banerjee tweeted that he had stolen a hat from a fascist! that had the logo of a sport played by black people. What? 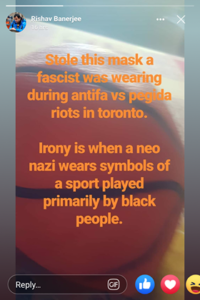 The security at the mall, Atrium on Bay, was so concerned they locked the doors so the antifascists, who behaved like brown shirts fascists, couldn’t get into the mall. The staff at the restaurant was shaken, as was the manager.

Think about this. In Toronto, the largest city in Canada and the most diverse in the world, people protesting for the LGBTQ2 community were terrorized by Antifa-the self-proclaimed  champions of rights of the oppressed. One man was hit on his head with a brick. 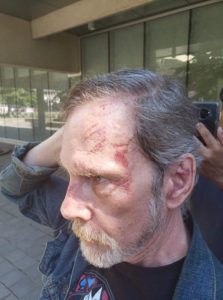 That these people thought that this was acceptable is frightening.  When did it become normalized to attack people with whom you disagree?

And where is the outrage form the politicians? Where is Mayor Tory? And Doug Ford and Justin Trudeau? Where are the tweets? Where is main stream media? The LGBTQ2 community was being defended and those defending them were attacked. And what do we hear? SILENCE 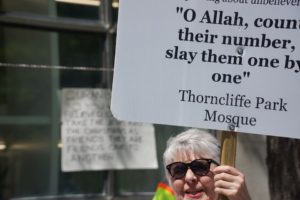 Now, there were  people calling themselves white nationalists who attached themselves to the PEGIDA rally. I do not condone their “articles of faith.” And I doubt that members of PEGIDA appreciate their “support,” because  PEGIDA Canada is against Nazism, Communism, Fascism and Islamization in Canada. 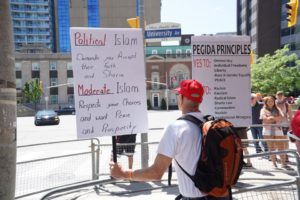 But that does not give anyone the right, in the name of anti-hate, for heaven sake, to attack and intimidate.

CITY TV is promoting a series on hate. PEGIDA is shown as a hate group. Did the journalist contact Jenny Hill, from PEGIDA, and ask her about her organization? If not, why not? That was the ethical thing to do.

And Antifa?  Perhaps they will turn the cameras on them in a later episode. PEGIDA was promoting gay rights in the Muslim community. What makes that hateful? Is it because they are pointing out values and beliefs in Islam,  as promoted in Canada by leading Imams, that are antithetical to western culture?

The late George Jonas wrote:“Don’t let Western civilization—the best and most humane form of civilization developed by mankind—perish by default.”

When did protecting western values, that are without a doubt not compatible with Islam, become hate?

Don’t take my word. Listen to the leaders in Islam; modern scholars and Imams.

ICNA Canada shares with its members, followers and supporters the book Riyad us Saliheen (The Gardens of the Righteous) where it says:

American Muslim scholar Daniel Haqiqatjou from Houston, Texas has written a scholarly article about the dangers of liberalism.

Liberalism is a dangerous religion, ‘distinct from Islam’

I justify this in terms of the Quran is that as Allah says that he hasn’t made any man with two hearts within him, meaning that you can’t be faithful to two separate faiths, two religions [دين] at the same time.

I do consider liberalism as a ‘deen‘ [دين], as a complete religion and faith

…well where does Islam and liberalism conflict and how big are those conflicts? Are they really dangerous? I argue that they are dangerous and they are problematic and we should be able to critique that and there are different ways to do that.

In other words, Islam cannot be accommodating to western values; liberalism.

An organization, PEGIDA, that promotes, protects and defends liberalism is called a hate group while their supporters are calling for equal rights for gays who are Muslim, and under Islamic law are sent to their death in Muslim countries.

And members of Antifa, some of whom were masked, who were terrorizing demonstrators for gay rights were given a free pass. By media and politicians. 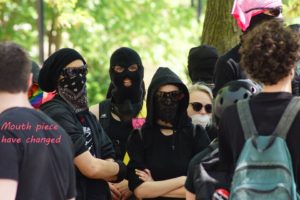 When did Antifa’s actions of terrorizing those with whom they disagree become acceptable. Let’s ask CITY TV.

Here is the link to the CITY TV report.