So here we are in the year 2020 and we have Black Lives Matter with BDS, which has once again used age-old tropes of experiencing “settler-colonialism” and “apartheid” in “Israel’s regime of oppression” to try to connect their plight with those of the African-American communities, using the murder of George Floyd and many other deaths of black Americans to push anti-Semitic ideals.

And then along comes the Hebrew Black Israelites.  Another “religion” coming from a line of religions trying to replace or supersede Judaism with Christianity. So now we have these recently created or resurrected, depending on your worldview “Jews,” replacing Jews.

So who are these people?

There are many sects which refer to themselves with variations of the name Black Hebrew Israelites.

Some, but not all, are outspoken anti-Semites and racists. It should be emphasized that the extremist and anti-Semitic sects of Black Hebrew Israelites are unrelated to the thousands of black Jews and other Jews of color in the US, who are genuine members of the Jewish faith. Furthermore, they should not be confused with Ethiopian Jews who mostly live in Israel today.  Anti-Semitic Black Hebrew Israelites assert that white people are agents of Satan, Jews are liars and false worshipers of God, and blacks are the true “chosen people” and are racially superior to other ethnicities.

Another sect of Black Hebrew Israelites is Israel United In Christ, a New York-based group with a national and international presence as well, including in Newark, NJ. The leader of the group is Nathaniel Ray (aka Bishop Nathanyel Ben Israel).  The group’s mission is to spread the Black Hebrew Israelite ideology and to educate black individuals of their true place in society. They are committed to spreading the ideology globally and recruiting as many black individuals as possible. They rely heavily on social media to promote their beliefs, as well as hosting public activities such as marches and Bible readings.  They reject Christianity, Islam, and Judaism, specifically calling Jews “the bastards that funded the slave trade.” They blame Jews and other ethnicities for all social ills plaguing black individuals, and claim that acceptance of this ideology and God will free black people. Further, they assert that Jews and white people worship the devil, and white people will become their slaves in Heaven.

What unites most Black Israelites is the belief that they are the true descendants of biblical Jews. Some sects within the movement disdain modern white Jews, experts say, claiming the mantle of the religion for themselves. (Supercessionism) Why not-Christians have been doing this for centuries. The Black Hebrew Israelite movement is comprised of some groups or members that have expressed anti-Semitic sentiments.

And into the fray steps Ice Cube! (born O’Shea Jackson), with his friend Louis Farrakhan, the leader of the Nation of Islam. 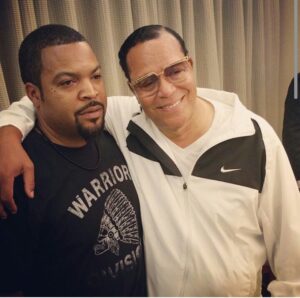 Is Ice Cube now a member of the Black Hebrew Israelites? He acts like it. I am confused. I thought he converted to Islam in the 1990s, referring to himself as a “natural Muslim.”

He shared a picture that declared “Hebrew Israelites [were] slaves in Ancient Egypt. Clearly they are a black people.” 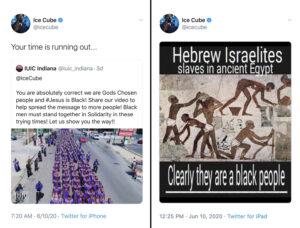 The message is a reference to the false idea, shared among Nation of Islam (Farrakhan) and the Hebrew Israelite group, that black people, not present-day Jews, are the true descendants of biblical Israelites.

ICE CUBE-seems unaware that all people in North Africa and the ME were black 3500-4000 years ago. You would not have found anyone blond and blue eyed back then. Not even Jesus. Now, there are black Jews from places like Ethiopia, rescued and brought  to Israel.

Here’s a great tweet of Jews sitting in front of a table playing Monopoly, held up by black individuals, with an Illuminati pyramid in the background. 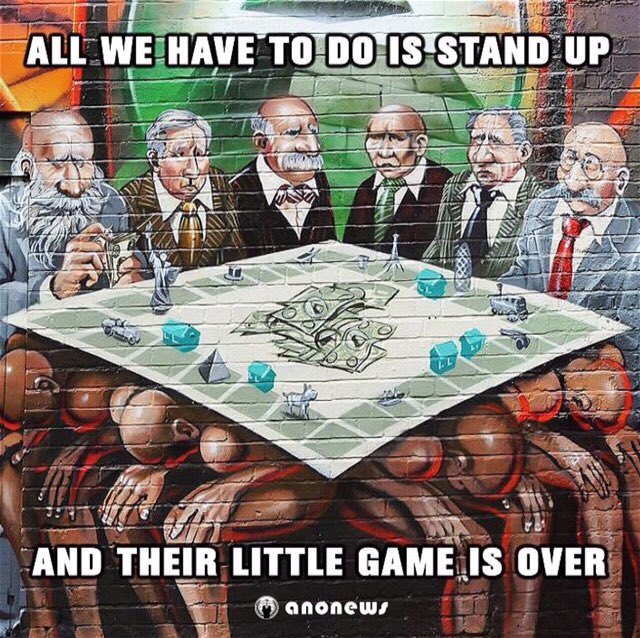 And Ice Cube retweeted a post referencing the cult-like group’s promo video and an assertion that the group’s members are “God’s chosen people”, with the threatening text “Your time is running out…”

You are absolutely correct we are Gods Chosen people and #Jesus is Black! Share our video to help spread the message to more people! Black men must stand together in Solidarity in these trying times! Let us show you the way!! pic.twitter.com/LYfPbSrUPC

He also tweeted a Jewish Star of David with what appeared to be a Black Cube of Saturn inside. The symbol has been described as a reference to occult worship possibly suggesting that Jews are controlling the world. 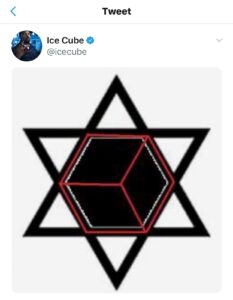 In his latest anti-Jewish outburst, the rapper posted,  “The Honorable Louis Farrakhan continues to warn America to this very second and he’s labeled one of your ‘evil names’ and you turn your ears off. Why is the truth so offensive that you can’t stand to hear it?” 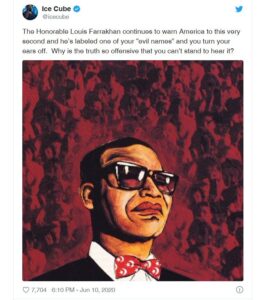 Ahhhh, the honourable Louis Farrakhan, leader of the Nation of Islam:

So, how did the death of George Floyd, a black man, by police in Minnesota, become pogroms against the Jews in Los Angeles?

Graffiti on the walls of a synagogue read “Free Palestine” and “f*** Israel.” A statue of Raoul Wallenberg, the Swedish diplomat who saved thousands of Hungarian Jews from the Nazis, was smeared with anti-Semitic slogans.

Along with the synagogues, Jewish-owned buildings and stores were defaced, in several cases also with anti-Semitic graffiti. The businesses were looted, too.

This city’s Fairfax district, a heavily Jewish area that has been continuously represented by a Jewish city councilman since 1953, was hit particularly hard by the kind of vandalism that has struck major cities following the killing of George Floyd in police custody.

Across the street from Beth El, the Kosher Mensch Bakery and Kitchen and the Jewish-owned clothing store Go Couture were destroyed. Stores on the fashionable Melrose Avenue, on the district’s northern border, also were damaged, as were multiple Jewish institutions in the area: Congregation Beth Israel, Congregation Tivereth Avi/Morasha Educational Centre, Shaarei Tefilah synagogue and the Shalhevet school for girls.

In Nashville, Tennessee, home of country music, the Holocaust memorial was defaced.  A sheet, taped to the granite memorials read “Kikes Lie, Whites Die,” and referenced numbers 14 and 88. The number 14 represents the 14 words in a white supremacist motto, and 88 refers to the eighth letter of the alphabet, making it shorthand for “Heil Hitler.”

In New York, home to approximately 5 million Jews, Mayor de Blasio (formerly known as Warren Wilhelm Jr.) felt the Jews in Borough Park, Brooklyn were more harmful than the BLM protesters, hundreds of thousands of whom gathered at Brooklyn Museum. But Jews were denied the right to go to school or play in their parks. I guess Jews spread Covid 19-shades of the Black Plague. The fear of Jews spreading the disease also led to police coming into Jewish communities to make sure that small shops were closed and no social outings were seen in the area.  (Note: The Jewish leaders re-opened the park with bolt cutters).

If it weren’t for the Jews, BLM and the Black Hebrew Israelites would have no leg to stand on; no right to demand equal treatment under the law, given to them by the Republican President, Abraham Lincoln. It is the Jews who gave the ethic to the world that all people are born with equal intrinsic value, all life is sacred and we have free will. Free will: moral agency.  That’s why they can riot – I mean protest in America and demand their rights as equals – as they loot and burn down businesses owned by other black people, Latinos and, of course, Jews. If they tried any of that in one of the 57 Muslim countries, China, Russia or North Korea they would be dead.

So now I get it. When a black man is killed by police – of any colour or creed, the response from BLM, BDS, the Black Hebrew Israelites, with a side order of Farrakhan, is to blame the Jews, in particular, vandalize and destroy Jewish places of worship and business – right?