NOTE: I have been requested by the British Museum to remove the mobile phone numbers of Dr. Spencer from this blog. I have been asked to provide another email address to which you may, and I hope will, send an email regarding the Museum’s continued refusal to address the issue of an antisemitic exhibit. info@britishmuseum.org

I am posting the email from the Museum at the end of this article. I have responded to it and agreed, out of courtesy, to remove Dr. Spencer’s freely given mobile phone numbers. It appears that Dr. Spencer is in some distress.

“Hey Average Joe, did you see this map? 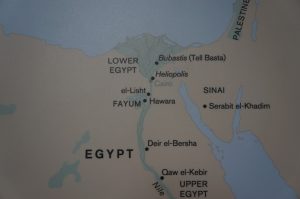 “Look where Israel ought to be it says Palestine. And it says it was called Palestine 4000 years ago! It’s as if the Jews never lived there. Can that be right?”

“Well gee,” replied Average Joe, “It must be right. After all it is in the Ancient Egypt section of the British Museum!”

I had the opportunity to visit the British Museum in May. Loved the Egypt exhibit. We had spent four days in Egypt in 2009. Sadly the last safe year for tourists. Egypt is an extraordinary country with thousands of years of history-glorious history. We saw the Pyramids and the Sphinx and rode on camels!  Think about the ingenuity of the people who built these monuments, only with manpower, no machines. We visited The Temple of Karnac and the Valley of the Kings in Luxor. We went into the crypts. Filled with marvelous murals that speak to religious beliefs. We walked through the Egyptian Museum-in Egypt!

And then the Egypt Exhibit in the British Museum.

And the map jumped out at me. “Palestine”? How could that be?

So I wrote to the museum to express my concern

I was in the Ancient Egypt section of the museum when I came across a map depicting “Egypt Reunited, Middle Kingdom Late 11th – 12th Dynasty (about 2025 – 1795 BC)”.  I was surprised to see an area on the map labeled Palestine.

This was the response:

In archaeological and Egyptological discourse, ‘Palestine’ (and ‘Syro-Palestine’) is an apolitical term that refers to an area (broadly from the north of Sinai to Kadesh, and from the Mediterranean to the current Jordan border), not a present or past state. Similarly ‘Nubia’ (which appears in same gallery) is an area that overlaps the boundaries of several historic polities. “Israel” is generally used to refer to the modern state, and “Israelites” as the group of people first mentioned in ancient texts on the stela of Merenptah in the 13th century BC.

While you are correct in indicating that the term “Palestine” is only attested from long after than the Middle Kingdom, around the 5th century BC, it probably derives from the much earlier term p-l-s-t , denoting the land of the Philistines, though it typically means a much wider region than coastal Philistia, extending to the “Land of Israel” or ancient Canaan in Biblical, Rabbinic and Samaritan sources.

We receive visitors from all over the world and we seek to give them ways of understanding the ancient regions in which objects are found, rather than defining modern geographical boundaries. The museum is apolitical and neutral, a place where anyone can visit to understand the long and complex histories of the world.

I hope that provides some perspective on our choice of terminology in gallery maps.

Hmmm. So let me get this straight.No geographical boundaries. Just the name of the place the object was found. Which according to what you wrote the area is called Philistia. But calling it Palestine  contributes to understanding the long and complex histories of the world. Apolitically of course.

In all probability, the vast majority of visitors to the British Museum do not understand the meaning of “discourse,” that the same word has different meanings depending on the discourse. Also, I would suggest that few people understand that words change meaning diachronically and synchronically.

I understand your desire to be apolitical. But I suggest that calling “Philistia” Palestine is unintentionally political. As you mentioned,

“Palestine” is only attested from long after than the Middle Kingdom, around the 5th century BC, it probably derives from the much earlier term p-l-s-t , denoting the land of the Philistines. though it typically means a much wider region than coastal Philistia, extending to the “Land of Israel” or ancient Canaan in Biblical, Rabbinic and Samaritan sources.”

As the area of land includes Israel, then does it not behoove the Museum to write Palestine/Israel?

So I reached out to Professor Richard Landes, educated at Princeton and Harvard, he is an American historian and author specializing in Millennialism. He coined the term “Pallywood” for what he considers the practice of “staged filming” of “evidence” against Israel for the benefit of the Palestinians. He now resides in Israel. He kindly forwarded my concerns to retired Professor James R Russell at Harvard, who specialized in Ancient Near Eastern, Iranian and Armenian Studies. He has published extensively in journals, and has written several books. He was the Mashtots Professor of Armenian Studies at Department of Near Eastern Languages and Civilizations at Harvard University,

The Professor came back with this response.

Though the response from the British Museum is well intentioned, it is wrong. Historically, Philistia (not “Palestine”) refers to coastal areas controlled by the invading Sea Peoples, and at that in a later period than the one to which the exhibit refers.

The Sea Peoples were not natives. The speakers of Northwest Semitic languages were: Israelites and Canaanites (as the Phoenicians called themselves). The only living speakers of a Northwest Semitic language today are the Jews of Israel. (Phoenician/Punic is long dead: the present inhabitants of Lebanon speak Arabic.) The word “Palestine” is today politicized beyond repair, and its use is generally for the purpose of delegitimizing and denying the presence of the Jews in our historical homeland. In the wake of the Nazi Holocaust it is not only a wrong and dishonest usage. It is morally evil and those who persist in it are offering aid and comfort to crime.

The correct term for the land north of Sinai and south of Phoenicia and west of the Jordan River is: the Land of Israel.

I am sorry to have to put this so strongly, but it has to be said. Similarly, the use of the term Old Testament, which is supposedly neutral, is in fact bigotry, since it implies that the newer Christian scriptures are superior, an improvement. One must say Hebrew Bible— scholars who do not say this are perpetuating anti-Semitism. And that is the oldest and most dishonorable of all human hatreds, the most murderous and the most contemptible.

I sent this reply to Neal Spencer, asking for a response. One expert to another.

And he replied within 24 hours.

We feel that your original query on how we use the term Palestine has been addressed. We strongly refute allegations of anti-semitism and must re-iterate that the Museum is a neutral and apolitical space, and one where anyone can come to understand the complexities of cultures throughout time. I hope that will be made clear in any publications you author.

Yes Neal. I have made it clear that you have no facts to uphold your position. That you did not have the courtesy to enter into a scholastic debate with a scholar-only with me.

It is my belief that allowing such egregious errors in the name of being “apolitical” only serves the intentions of those who abuse language to maintain a false narrative. I cannot understand how Mr. Spencer can continue to justify naming the land associated with Israel for more than 3500 years as Palestine; particularly when there was no such place at that time and only came into our nomenclature in the 1960’s. It is to me just another attempt to eliminate, exterminate, annihilate the only Jewish state, the one last safe space for the remaining 15 million Jewish people.

Britain has a 1000 year history of Jew hatred. How sad that the British Museum participates in its spread.

You can make a difference. Don’t just comment on social media. If you agree that the British Museum is incorrect in its nomenclature which eliminates the historical and legal jewish homeland -send an email or  phone

I have seen your recent blog concerning the British Museum. The Museum of course respects your right to express your views but refutes in the strongest terms any suggestion of antisemitism.

However I must ask that you remove Neal’s personal contact details from the blog. The Museum would be very happy to hear peoples views and comments on the subject sent to info@britishmuseum.org which is our official channel for feedback.

The publication of Neal’s contact details  is in breach of the [UK] Data Protection Act, specifically the first principle of that act which says that personal data should be processed fairly and lawfully; in particular data processors should:

•not use the data in ways that have unjustified adverse effects on the individuals concerned;
•handle people’s personal data only in ways they would reasonably expect

In addition, as data subject, Neal has rights under the sixth data protection principle, one of which is a right to object to processing that is likely to cause or is causing damage or distress.

I accept that some of Neal’s personal data is available on our web site, but the personal mobile numbers disclosed are of particular concern here.

I would be grateful if you could confirm you will remove them.