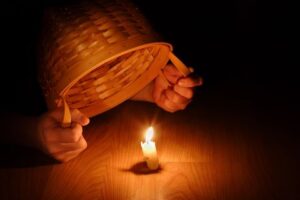 Doctors who bent the knee to the WHO and their local medical organizations are guilty of gross crimes against humanity. You knew. All of the doctors knew the truth.  And if you didn’t at first, certainly your questions should have been prolific once you were told to be silent – to not question.

I have written a great deal about the failure of our medical system during Covid.

But now I am writing about the Jewish doctors who refused treatment to their patients, who were afraid to counsel against the vaccines or repurpose drugs(like the late Dr. Vladimir “Zev” Zelenko) or refused medical and religious exemptions.  And, to this day, seem to be rather quiet.

The Jews are the Light Unto the Nations.

Our ethic of freedom underpins the American Constitution.

It seems our Jewish doctors have hidden that light under a basket. It is past time to come out from under.

My Jewish doctor refused everything. Needless to say, he is no longer my doctor. It pains me to write this as I am a proud Jew and a hospital chaplain. But these doctors are “more guilty” because they know better. Or should have known better. You are the generation of doctors post-Holocaust who learned about Mengele and his cohorts and their experiments on human beings for the sake of experimenting. You knew. You are educated enough to have learned about the Nuremberg Trials and Code. Too many self-righteous, self-serving, sanctimonious people, today, believe that they would never have behaved like the Nazis, German civilians, or the doctors living Germany. “Not me” they would say.

Right. You did. You let the government cower you into poor medical practices if not downright malpractice.

And Jewish doctors! Unlike other religions that demand blind obedience, Judaism demands questioning. We are raised on the importance of questions.  We are taught that it is not the answer that is so important but that the question is most important. We are to ask our children, “Did you ask a GOOD question, today? Our major holiday Passover, when God took us out of slavery into freedom is celebrated and shared by asking FOUR Questions.

You not only failed at medicine, at implementing the Hippocratic Oath, but worse, the Nuremberg Code.  You knew better, which makes your sin so much greater. You could have been the leaders in questioning the vaccines, especially for children, the lockdowns, the masks, the social distancing. And now as more information is coming out(not that it wasn’t there if you had only looked and then acted like the Doctors who stood for science and then lost their licenses); fewer people would be dead. Fewer people would have life-changing illnesses from the vaccines; fewer people would have lost their jobs and businesses. How many people would be alive today if you had prescribed ivermectin? Or hydroxychloroquine?   You don’t know because rather than using your own experience with your patients and your knowledge of drugs, you allowed a college to dictate care. This has never been done before. Why now?

You not only failed at medicine; you failed Judaism. You failed the incredible ethic brought into this world by the Jewish people: all life is sacred and we have free-will. You abused the gift of free-will out of fear for your job.

You have broken with Torah.

You have broken with Talmud.

You have broken with the Ethics of our Fathers.

You have broken with the 6 million Jews murdered during the Shoah and men women and children tortured by Mengele and his cohorts.

At what point will you be ready to stand up to the medical associations and pharmaceutical companies to whom you have bent the knee? What more do you need to do the right thing, the moral and ethical thing?