Dear Jews: Too many of you don’t even know what it is you are not to forget

Just before he was beheaded, Daniel Pearl said: 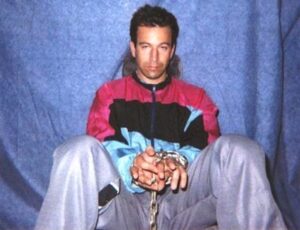 I was out the other day and heard this most upsetting statement: You don’t vote for a political party just because of the way they treat Jews.

We, the Jews, are  the canary in the mine. And, today, the mine is filled with Communists, Marxists, anarchists, socialists, fascists  and Jew haters from all walks of life; especially in the parties on the left; and in America that is the Democrat Party and their allies, Black Lives Matter, with a side order of BDS and a pinch of Antifa.

I watch in horror as Jews march with Black Lives Matter. The enemy of your enemy is not your friend. Have they taken the time to learn about BLM before standing with them?

The Black Lives Matter founding manifesto, published in 2016 (then removed from BLM website), describes the United States as a “corrupt democracy originally built on Indigenous genocide and chattel slavery” that “continues to thrive on the brutal exploitation of people of color” and that perpetuates “the ugly American traditions of patriarchy, classism, racism, and militarism”. The platform accused Israel of committing ‘genocide’ and referred to the Jewish state as an ‘apartheid’ state.”

Furthermore, “[t]he platform also officially joined BLM with the anti-Semitic BDS campaign to boycott, divest and sanction Israel.  BDS campaign leader Omar Barghouti acknowledges that the goal of the BDS movement is to destroy Israel.”  Moreover, “BDS campaigns on US campuses are characterized by bigotry and discrimination directed against Jewish students.”

Yet I haven’t seen these concerned Jews march against Jew hatred. You know, the pogroms that took place in America, while people of colour were protesting their treatment. Pogrom is a Russian word meaning “to wreak havoc, to demolish violently.” Historically, the term refers to violent attacks by local non-Jewish populations on Jews in the Russian Empire and in other countries. The first such incident to be labeled a pogrom is believed to be anti-Jewish rioting in Odessa in 1821. Seems not much has changed regarding the violent action against Jews.

I have been told, well, not all members of BLM hate Jews. Of course not! Just the leadership, they say. Not all Germans who joined the Nazi party were full on Jew haters, but the party promoted it and look what happened. The only difference today between the BLM and the Nazis is skin colour. The hate is the same. And you stand with them. And they stand together. David Duke of the KKK stands with Ilhan Omar who has shared her views of Jews and Israel, the home to 7 million Jews, half the world Jewish population, many times.  You appease them thinking they will treat you with respect: like the way they respected white people who knelt before them so much that they went on to loot and burn and destroy?

Where were you with your placards of protest against the BLM pogrom in the Los Angeles area in May during the Jewish holiday of Shavuot? Congregation Beth Israel — a synagogue in the Fairfax district of Los Angeles was vandalized on May 30 with graffiti stating “free Palestine” and “f— Israel.” 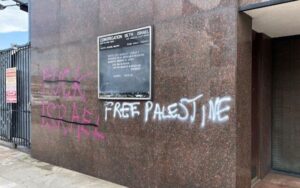 A statue of Raoul Wallenberg, the Swedish diplomat who saved thousands of Hungarian Jews from the Nazis, was smeared with anti-Semitic slogans. The Kosher Mensch Bakery and Kitchen and the Jewish-owned clothing store Go Couture were destroyed. Stores on the fashionable Melrose Avenue, on the district’s northern border, also were damaged, as were multiple Jewish institutions in the area: Congregation Beth Israel, Congregation Tivereth Avi/Morasha Educational Centre, Shaarei Tefilah synagogue and the Shalhevet school for girls.

Where were you when Wilhelm de Blasio walked with the BLM protesters – maskless – yet locked up the play area, Kolbert Playground, in Borough Park where Jewish children played? And let us never forget that according to BLM, Ashkenazi Jews sit at or near the apex of the privilege pyramid.

Dear Jews, what has happened to you living snug as a bug in a rug in America? When did you devolve into self-serving, self-righteous, sanctimonious, Reform, liberal, progressive, 92stY type Jews, who have bastardized the teachings of Hillel to the point you are committing Jewicide, in the name of social justice? Is this the result of assimilation in America? Hannah Arendt wrote “Assimilation is only possible, if one assimilates oneself to Antisemitism.”

How many members of an organization like BLM need to be anti-Semites before you walk away?  How many Germans were Nazis before German Jews thought to themselves; Hmmm, need to not only walk away, we need to run for our lives!

Prior to the rise of Hitler and the NSDAP,  National Socialist German Workers’ Party, The Nazis, Jews were loving life in Germany. They had lived in Germany for 1500 years. They were accepted! The German Jew represented the largest Jewish group in Western Europe at that time. There was a tendency of German Jews during the process of assimilation to identify with liberal, enlightened and humanistic representatives of Germany.  In fact, antisemitism did raise its head on occasion, Jews were discriminated against, but on the whole there was good reason to believe that such prejudice would gradually disappear. They felt attached to the religion, even though the strength of the link varied from individual to individual; but Judaism as such had ceased to occupy a central place in their lives which were otherwise governed by non-religious factors, resulting from the contact with the wider society. A German Jew wrote:

“We want to belong to the German nation and shall belong to it; at the same time we can and must remain true to our religious community and ethnic heritage.”

We know what happened. Do our children  and grandchildren know this history as they march with BLM?

Dearest good-intentioned Jews, Hillel asked of us, “If not now, when?” I ask you, if not now, when will you stand with Am Yisrael? When will stop supporting the organizations, like Black Lives Matter, that attack the Jewish people?  Who stand with BDS, the organization bent on eliminating the state of Israel? And don’t for a minute believe that you are standing with those who just question Israel’s “annexation” of her legal and historical land. They want the total elimination of the state of Israel, and another Muslim country incorporated. How many Jews do you think would be allowed to live in that new Muslim State? Here, I’ll tell you. ZERO. Muslim states are Judenrein. Hitler tried the same thing in Europe. That is the history you were to Never Forget and Never Again allow.