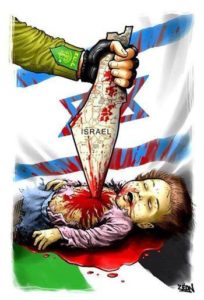 In the aftermath of the murder of eleven Jews at prayer on the Sabbath in their synagogue, there was much sturm and drang about the cause/causes.

We are all aware of the well-known Jew hatred from the far right-the white supremacists, the KKK the Neo-Nazis. Bless them. They don’t hide their hate. And the new antisemitism from Islam is also well known to those who read their prayers, their supplications, their modern commentaries.

There are billions of people who have been raised on hating and scapegoating Jews. Blood libels re-invented for the 21st century contain a myriad of conspiracy theories; including Jews were behind 9/11 and of course, the constant attacks on the Jewish state; the only democracy on the Middle East and North America and the country and people from whom the Judeo/Christian ethic that underpins democracies was established.

Sadly, though, the greatest danger to the Jewish people is main stream media . It is the insidious insertion of anti-Semitic tropes in main stream media articles, written by mains stream journalists, approved by main stream editors and main stream publishers that fires up the Jew haters.  This new strain of Jew hatred-well; not so new; came to our attention following the 1973 Yom Kippur  war when the Jewish people showed themselves to be the reincarnation of the Lions of Judah, the warriors of Israel, and once again took down multi-millions of Muslims trying to destroy the state, beginning at her modern reconstruction in 1948.  Suddenly, the Jews were no longer those “poor” people who had been sent up in smoke while the West intentionally turned away. It still seems not to have reached critical mass that anti-Zionism is the 21st century reincarnation of antisemitism.

Attacks on Israel remain de-rigeur in the media. I am reporting on one instance. It is not an outlier. I know many of my readers can think of other “journalists” who have justified Jew hatred with their biased reporting that is approved by their editors, their ombudsmen, and ultimately the publisher. One need only to reveiw the media reports on Operation Protective Edge to find a plethora of antisemitic reports.

I reported a story by Doug Saunders of the Globe and Mail to their public editor, Sylvia Stead.  Saunders decided to add the state of Israel to his list of pariah countries, like Russia, North Korea, the Philippines,  Egypt and Saudi Arabia. Just slipped it in without a by your leave. Normalizing the hatred for the state. Jut lumping in this democracy with the muck of autocratic, theocratic, despotic countries who murder their own citizens for political reasons. An antisemite, whether from the left or right, reading this in a  main stream media outlet article, will confirm her/his hate because their hate has been justified, condoned by “real journalists.” What better confirmation can they have?

Here is the response by the public editor, Syliva Stead, to my letter of complaint which you can read in my article.

Given that there is evidence the Israeli Defence Forces have used targeted killings in the past, I think a columnist can make the statement that Mr. Saunders did. Mon 2018-10-22, 12:39 PM

Thank you for your response. You think Mr. Saunders can make that statement comparing Israel with these other states, calling her a pariah state? Your response is cavalier in content. It speaks volumes about your morals, values and ethics and a breathtaking exhibition of moral relativism. I assume this is the stance of the publisher of the Globe and Mail, as well.

The targeted murder to which Saunders referred were attacks on citizens of the country in question; in another country, for political reasons. I saw no mention of Afghanistan or Iraq. And no other democracy was mentioned.

In other words, according to your response, you and Mr. Saunders are mixing apples and oranges in order to call Israel a pariah country.

I want  the reports you relied on regarding targeted killings so you and Mr. Saunders can show me the link between Israel and these other countries and the murders committed by them. I am especially interested in the connection between Korea and Russia poisoning their own citizens who were in other countries, for political reasons, with the IDF targeted killings.  And I want the link to which Saunders referred that led him to make that statement that Israel is  a pariah country like Russia, North Korea, Philippines, Egypt and Saudi Arabia.  I want to see his research, Ms. Stead, that underpins that statement he made about Israel.

You refer to the targeted killings of the IDF.

“Israel’s targeted killing policy, along with other less significant factors during the first decade of the 21st century, was effective in mitigating suicide terror attacks generated from the Territories in general and from Gaza most specifically. Israel’s targeted killing policy achieved tactical and strategic success. From a tactical perspective, the operations accurately eliminated their targets. From a strategic perspective, the policy was the key factor in stopping or at least mitigating suicide bombing fatalities.

“The data presented indicate that over time, Israel’s targeted killing policy was effective in mitigating suicide bombings from Gaza. The manner of which the said effectiveness was evaluated as it pertains to Israel, may also be relevant when evaluating the effectiveness of targeted killing campaigns carried out by different states in different theaters. Furthermore, although the targeting of key operational and spiritual leaders seem to be most effective, from the data analyzed it is not completely clear what makes the targeted killing strategy effective.”

Take note Ms. Stead-the targeted killings were in response to the horrific suicide bombing attacks on Jews living in Israel.  The killings of terrorists-please note the word terrorists- reduced the murder of Jews. Now as far as I am aware the government of a country has a responsibility to protect and defend her citizens. Does Mr. Saunders have a problem with that?

You are comparing Saudi Arabia, Russia, North Korea, Philippines, Egypt murdering of their citizens, their journalists, their judges, for political reasons, with Israel protecting her citizens from acts of terrorism. Now, this is moral relativism in the name of antisemitism.

Now let me put this into perspective for you. I want you to read this article and then Google Marnie Kimmelman.

Marnie Kimmelman went to school with my eldest child, Ms Stead. She was murdered on a beach in Tel Aviv. In 1990. Blown to bits. Tel Aviv-in the state of Israel. Now keep in mind that “Palestinians” scream Palestine will be free from the river to the sea. Linda Sarsour,  the darling of the American democrats, tells us that, today. This, of course, requires the annihilation of the Jewish state of Israel. Does Mr. Saunders have a problem with Israel preventing the annihilation of the Jewish state?

Your response to my query is unacceptable. If this is beyond your scope as public editor then refer me to the one who will be responsible for this gross example of moral relativism in the name of journalism at the Globe and Mail as perpetrated by Doug Saunders.

As it stands, by referring to IDF targeted killings; to which Mr. Saunders made no mention, you are promoting antisemitism/ anti-Zionism. You and the Globe and Mail are promoting the right of terrorists to murder innocent Jewish civilians when you justify Mr. Saunders article.

There has been no response from Ms. Stead. Just silence.

How does this response differ from the wilful blindness of journalists during the Nazi era?