Justin Trudeau enables the destruction of Canada by the #IndignantPeoples 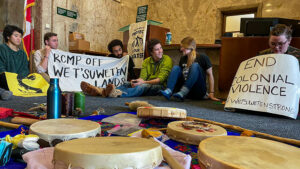 Our Prime Minster, Justin Trudeau, is single-handedly bringing Canada into a homegrown recession as he dithers over the rights of 5 #IndignantPeoples; the Wet’suwet’en Five, who inserted themselves as the nations’ spokespersons and pay themselves salary, travel and honorariums to publicly parade around in regalia, some of which are blatantly incorrect.

We have a beautiful country blessed with resources. We were known as drawers of water and hewers of wood because this country was blessed with natural resources. Not anymore.  We have the blessing of the resources but not the ability to bring them to market. We have leaders who care not a whit about our economy; the well-being of the vast majority of hard working Canadians – Canadians who want to work and not be kept on welfare. We have a government that is feeding into the big lie that Canadians are settlers and colonizers and the vicitmizers of the poor Indigenous Peoples. We just learned that Warren Buffet’s Berkshire Hathaway has decided against investing $4 billion in a project to bring Alberta natural gas to port in Saguenay, Quebec because of the mess made by our Dear Leader.

And heaven help you if you deny your place as settler and colonizer.  Some self-righteous left wing progressive will question your humanity. I was asked to show my papers! What? Show me your papers, he said, that says you are human. This is the response when one questions one of the #IndignantPeoples (Indigenous and not)about this false dichotomy of victims (the Indigenous peoples – all of them) and the victimizers – everyone else who cannot claim a place in the Indigenous or Metis communities.

The Left has done its job well as Canadians, having internalized the settler/colonizer narrative, prostrate themselves and beg forgiveness. The failure of the Indigenous peoples is the direct result of the settlers and colonizers, we are taught.  We are the cause of all ills. I ask, name a settler/colonizer alive, today. There aren’t any. But it is still our fault.

And so we are held hostage, across this land, by 5 #IndignantPeoples, hereditary chiefs, and their non-Indigenous followers who insist the country will stop until their concerns are met. How did we devolve to this place where “hereditary” chiefs can dictate to the rest of Canada? This is not how a democracy functions.  This is an autocracy, despotism and now anarchy. There is nothing in our Constitution about power for hereditary anyone.

The whole point of Aboriginal rights in Canada — the whole purpose of Section 35.1 of the Constitution Act, which explicitly recognizes and affirms the Aboriginal and treaty rights of Canada’s Indigenous peoples — is “the reconciliation of the pre-existence of Aboriginal societies with the sovereignty of the Crown,” as the Supremes’ Chief Justice Antonio Lamer put it.

The Supreme Court in Delgamuukw was unambiguous: “Constitutionally recognized Aboriginal rights are not absolute and may be infringed by the federal and provincial governments,” and there are massive hurdles that the Crown has to surmount in order to infringe upon those rights. But they’re by no means insurmountable. Any infringement of Aboriginal rights and title must be constrained by a clear and valid justification. Among the justifications the Supreme Court judges in Delgamuukw identified as being available to the Crown are “the development of agriculture, forestry, mining, and hydroelectric power, the general economic development of the interior of British Columbia, protection of the environment or endangered species, the building of infrastructure and the settlement of foreign populations to support those aims.”

In other words, the development of jobs. Work that provides dignity to the human soul. And the vast majority of Indigenous Peoples involved in the pipeline “controversy” want the pipeline and the work for their people so they can pull themselves out of poverty, and drug and alcohol addiction that comes with helplessness and hopelessness.These are people who do not want the mantle of victim placed on them and exploited by the do-gooder left.

But our government, our PM, proud to be a feminist, traveling the world, spending millions of dollars promoting his gender equality policies, is talking to a self-declared male “hereditary” chief, Frank Alec, calling himself Chief Woos, while ignoring the legitimate hereditary women chiefs. Well, our PM is not talking to anyone. He seems, once again, to be MIA. But, Alec is calling the shots.

Not the women. And certainly not the Government. Busy appeasing. This constant call to appeasement will only breed contempt; especially for the victimized. We do no one a favour by constantly referring to them as victims. It belittles them. As if they have no agency at all but are at the behest of others. And referring to Canadians, today, as settlers, with the connotation of privileged, is outrageous.

Who is Chief Woos? It seems some of his past is unknown. Since the 1980s, Woos has held various roles, including housing officer with the Carrier Sikani Tribal Council, deputy chief with the Lake Babine Nation and director of membership services with Takla Lake First Nation, his LinkedIn profile says. How did he become the de facto leader?

Formerly, the title Chief Woos was held by Darlene Glaim, who was part of the Wet’suwet’en Matrilineal Coalition, which supported the Coastal GasLink pipeline, and was working to build connections between the hereditary chiefs and the elected councils. The three women involved — Glaim, Theresa Tait-Day and Smogilthgem Gloria George — say that five male hereditary chiefs stripped them of their hereditary titles. The name Woos went to Frank Alec in 2019, The Globe and Mail reported. 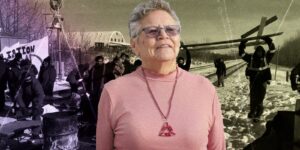 Gitdimden Matriarch Gilughgun, Rita George, a Wet’suwet’en hereditary subchief, decided to come forward to voice her opinion about the anti-pipeline protestors who are not affiliated with the Wet’suwet’en First Nation.  She opposes the blockades that have been roiling the country. Ms. George is both a band member and part of the hereditary system. She also previously helped translate a major Supreme Court decision that gave greater control to Indigenous communities over their land. George expressed having great difficulty speaking out against some of her own and the unaffiliated anti-pipeline protesters who have turned her community into a battleground over issues of climate change policy. She said even the elders are afraid to voice their concerns.

“I want the world to know what’s been happening to us. We are being bullied, it’s so shameful, so hurtful. We are being humiliated.” said George.

All of this is taking place despite the fact that we are all in it together, as Canadians. Justice Lamer put it so succinctly and eloquently:

I hope we all come to agree on that statement. We are all here to stay. The “colonizers/settlers” aren’t going anywhere. It is time for the 5 #IndignantPeoples and their non-Indigenous #IndignantPeoples minions to accept Canada as it is, today, a grand mix of ethnicities, sharing one land.  And work together for the betterment of ALL Canadians.