It is a sad time in Canada. A library in Ottawa cancelled the presentation of the documentary called “Killing Europe.” It is produced by Michael Hansen who recently returned to Europe, after an absence of 15 years, to make his documentary about the changes that have occurred since his departure. It received 9.7 stars from IMBd. Richard Warman, human rights lawyer said  “it was clear it was going to be an all-out assault on immigrants and the Muslim community.” I don’t know how he was so sure of this statement but the documentary was cancelled. It’s a pity that the people in charge lacked the courage of Lindsay Shepherd, the young lady who stood up to McCarthy-like censorship at Wilfrid Laurier University in Canada and demanded the right to share uncomfortable speech and views.

According to the CBC

“The trailer for the film includes interviews with right-wing commentators, anti-immigrant rhetoric and violent imagery.”

I always ask who decided that the commentators are right-wing? What does that mean? Does the CBC point out left-wing commentators, too? What is anti-immigrant rhetoric? Does that mean being against open un- vetted immigration or all immigrants from anywhere? Is it a sin today to talk about legal and illegal immigration? When did that happen, exactly? And why? And violent imagery? I watch TV and see nothing but violence. I see what is on video games, today, played by young people. Terrorist attacks are mighty violent yet we see them over and over and over again. So how was it decided that this imagery was too violent? And if it was then one could have put a warning on the documentary the way movies are categorized.

I saw the documentary and met the man who made it. He is quiet and unassuming, and calmly, with little opining, revealed the results of what happens when two disparate cultures collide: Islam and the West.

For those who have forgotten their history:

Islam first emerged in Arabia during the mid-seventh century and within 150 years the movement dominated the entire Middle East, as well as northern Africa and Spain. The Spanish occupation by the Moors began in 711 CE when an African army, under their leader Tariq ibn-Ziyad, crossed the Strait of Gibraltar from northern Africa and invaded the Iberian peninsula ‘Andalus’ (Spain under the Visigoths). The heartland of Muslim rule was Southern Spain or Andulusia. Spain became one of the great Muslim civilisations; reaching its summit with the Umayyad caliphate of Cordova in the tenth century.The eleventh century Pope called on Christians to take back the Holy Land from the Muslims for they had closed Jerusalem to Jews and Christians. This was the first of nine Crusades which took place between 1095 and 1291. In the 14th century, the devshirme system was created. This required conquered Christians to give up 20 percent of their male children to the state. The children were forced to convert to Islam and become slaves.

Muslim rule declined after that and ended in 1492 when Granada was conquered. Christian Europe rose.

Then Islam took hold again with the rise of the Ottoman Empire, one of the most robust and long-lasting dynasties in world history. This Islamic-run superpower ruled large areas of the Middle East, Eastern Europe and North Africa for more than 600 years. The chief leader, known as the Sultan, was given absolute religious and political authority over his people. Osman I, a leader of the Turkish tribes in Anatolia, founded the Ottoman Empire around 1299. The term “Ottoman” is derived from Osman’s name, which was “Uthman” in Arabic.

The Ottoman Empire reached its peak between 1520 and 1566, during the reign of Suleiman the Magnificent. This period was marked by great power, stability and wealth. At its height, the Ottoman Empire included the following regions: Turkey, Greece, Bulgaria, Egypt, Hungary, Macedonia, Romania, Jordan, Israel/Judea/Samaria, Lebanon, Syria, Some of Arabia, and a considerable amount of the North African coastal strip.

Starting in the 1600s, the Ottoman Empire began to lose its economic and military dominance to Europe. The Ottoman Empire officially ended in 1922 when the title of Ottoman Sultan was eliminated.

This is the history of the ebb and flow of cultures, of ideologies, one against another. Yet, today, when we have world-wide media and instant information we are now told what we can and cannot see taking place in Europe-or think for that matter. To see a movie about changes in Europe brought about by a revival in Islam is verboten. It is hateful. It is Islamophobic. Yet we can without hesitation or fear of being labeled a racist, criticize China whose leaders are unabashedly “ushering in a new era of glory for China — a rejuvenation that would end the country’s 200-year absence from being the centre of the world.”

The library looked at the FB page of Act! for Canada which was sponsoring the screening of the film Killing Europe on Saturday, November 25. The group’s Facebook page says they aim to speak out “against the rise of Islamism.” Can’t do that. Can’t speak up against the rise of Islamism.  We are talking Islamism; not Islam. Do we not take great pains to distinguish between Islam and Islamism? Sharing a film that is about Islamism is now hateful? I thought all agree that Islamism is the radical view of Islam-the hateful Islam, the one that is associated with the fascism of Nazism, terror and terrorism. Much different from Islam.

Fareed Khan, a member of the group Ottawa Against Fascism, organized the writing campaign against the event. He said public space should never be used to promote hatred.

“These are taxpayer-funded facilities. They represent the entire community. Groups that go out and promote hate against any identifiable group should never be allowed to use public facilities.”

Fine. But was this not a perfect place for him to ask to speak in response to the information he thought would be presented in the documentary? He could have given us his expert opinion on Islam versus Islamism. This was a perfect Lindsay Shepherd moment that was allowed to die on the vine. And the irony of it all is that Hansen exposed Antifa, a group that is without question fascist.

Now let’s get back to Khan’s concerns about hate in the public square in Canada. Did he stand up and attack Imams who in their mosques called for death to the Jews? 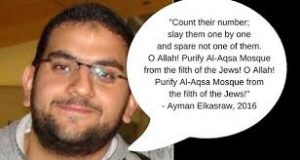 Is he against the al Quds Day Parade that calls for death to Israel? Does he think it appropriate that Muslim students be allowed to pray in our secular schools when their prayers demean, denigrate and disrespect Christians and Jews? Or does he only try to suppress negative views of Islamism? Or Islam-be it the ideology or the religion?

Whether people like Khan and Warman and organizations like the Ottawa library system like it or not, Europe is undergoing a massive change because of the arrival of millions of Muslims. But this is kept hushed, according to Hansen, by  a ” big media blackout in Europe.”

“Killing Europe” exposed the fears of women who will no longer go out alone at night. Of fathers for their daughters.Of police who said there are places they will not go for fear of being attacked.

Michael Hansen exposed the changes in Europe because of the need for security…against Muslim terrorism. And here is a reminder of the terror experienced in Europe.

Yet these acts of violence pushing Islam into Europe, as was done in the past, are downplayed by Western leaders including Angela Merkel, Barack Obama, Justin Trudeau and the Pope. It’s not Islam. It’s Islamism. It’s radical Islam. These are not real Muslims.

Muslims have invaded Europe before. To think that it will not happen again is not to think. To deny us access to that information is to tie our hands and prevent us from protecting our culture, western culture, a culture proudly grounded in the Judeo/Christian ethic.