“Not only have we seen a significant uptick in online expressions of anti-Jewish hatred, but anti-Semitism has increasingly sprouted in regions that are typically less prone to such prejudices, including Eastern Canada, the Prairies and parts of Western Canada.” 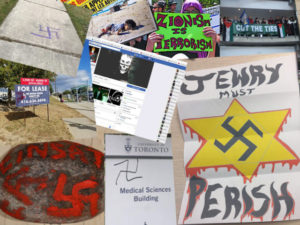 So, where is my Prime Minister? I haven’t heard a word or seen a tweet about the antisemitic attacks taking place across Canada.  From Edmonton, Alberta, to Montreal, Quebec. From outside synagogues to  a coffee shop. Not a peep.

He had no problem tweeting his heart out after a young Muslim girl in Toronto reported that she was attacked: a man assaulted her with scissors, twice a few minutes apart, trying to cut off her hijab. Less than 20 minutes later, the Toronto Police tweeted an alert. The first news story was posted well before 10 a.m., international interest followed soon after and the school was swarmed with reporters.

The story and the PM’s tweets went viral.

Prime Minister Justin Trudeau commented on the investigation, a few hours after it began

“My heart goes out to the young girl who was attacked, seemingly for her religion. I can’t imagine how afraid she must have been,” he said. “I want her and her family and her friends and community to know that that is not what Canada is, that is not who Canadians are… We are better than this.”

And “Canada is an open and welcoming country and incidents like this cannot be tolerated.”

He was disgusted by the Islamophobia!

Ooops. It was not true. The girl was never attacked.

The Prime Minister said he was relieved that the incident hadn’t in fact taken place. Aren’t we all.

“We are a country that defends freedom of religion, freedom of expression, and people’s rights to go to school without being fearful or harassed. This is fundamental to who we are.”

Prime Minister Trudeau proudly supports freedom of religion and expression and one should be able to go to school and not be harassed. One should be able to visit one’s parents, get a cup of coffee, walk to a place of worship and also not be harassed . But hey, the PM seems to be MIA when it comes to Jews under attack. As is the international media. Is the life of a Muslim girl more valuable that the lives of Jewish children?

Our Prime Minister’s response, or lack of, this year, is not new. He seems to be unaware of the increased rise in Jew hatred in the past few months.

October 2018 we also went through this.

October 9, 2018 a Toronto Jewish Hebrew day school, Leo Baeck, in the heart of one of the oldest Jewish neighbourhoods in Toronto, was targeted by hatemongers. Young Jewish kids were met with the following words on signs just outside the school: “Free Palestine,” “Long Live Palestine” and “Long Life to the Hamas.”  Hamas does not recognize Israel’s right to exist and continues to call for an armed struggle to “liberate all Palestine” from the Mediterranean Sea to the Jordan River.

He was AWOL then and MIA now.

Here we have actual attacks on people, who happen to be Jewish, and the PM once again appears to be silent. If he said anything, I missed it. Please share with me if you find any of his responses to these attacks.

Two boys were actually attacked going to synagogue. Two boys wearing kippot, or Jewish skullcaps, were walking near the Garnet A. Williams Community Centre in Thornhill, Ontario, when another youth approached them and began swearing at them from behind. As the Jewish boys tried to leave the area, the youth punched one of the Jewish boys in the face and proceeded to follow him and his friend for some distance before fleeing the scene.

Sounds a lot like the hijab incident that overwhelmed the PM. But this didn’t. Hmm

A few days earlier a man was accosted. In Montreal.

“On Sunday, July 28, the victim who wishes to remain anonymous, was visiting his elderly parents at a condo building in the Saint-Laurent borough of Montreal.

“While waiting for a cab operated by the Taxi Champlain company to stop blocking the underground garage, the victim heard the taxi driver shout, “I won’t move for any f***ing Jews!” The driver then allegedly threatened to kill the victim, who is visibly identifiable as a Jew because he wears a kippah, or Jewish head covering.

“The victim then attempted to photograph the taxi number in order to file a complaint, at which point the driver exited his car and punched him repeatedly until a parking supervisor intervened. The victim’s phone was also smashed.”

And the PM was busy doing what that day?

Seems going to Tim Hortons, a Canadian iconic coffee, shop is dangerous for Jews, now, too.

A young man was sitting in Tim Hortons, in Montreal, his usual haunt.

“I was sitting by the window when I noticed a man notice me. He was smoking outside and staring at me. His beard was well groomed, nice clothes…He pointed at me. He pointed at my kippah. He pointed at the sky. He made the throat-slitting gesture, more than once. A lot. He said things that made it very clear.”

His father came to help him. He wore a cap rather than a kippah. Seems a lot of that is going on these days, hiding one’s Jewish faith, including Germany. Germany!

As they left  the man was“ Staring straight at me for what was now just over the thirtieth minute, he repeats into the receiver “I won’t touch him, but he’s going to die,” stopping for a moment only to take a picture of my dad’s license plate.”

And there is nothing like waking up to Jew hatred sprawled all over you garage, as happened just north of Toronto, one of the most diverse cities in the world. 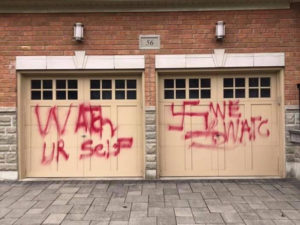 These were not hoaxes. These were real attacks on Jews who make up 1% of the population in Canada.

One would think that the PM who promotes tolerance, inclusion, accommodation, and diversity would be absolutely appalled by the number of attacks on Jews. And would be tweeting!