Prime Minster Trudeau: Where is your concern for Jew hatred? Where are your tweets?

October 9, 2018 Toronto Jewish Hebrew day school, Leo Baeck, in the heart of one of the oldest Jewish neighbourhoods in Toronto, was targeted by hatemongers. Young Jewish kids were met with the following words on signs just outside the school: “Free Palestine,” “Long Live Palestine” and “Long Life to the Hamas.”  Hamas does not recognize Israel’s right to exist and continues to call for an armed struggle to “liberate all Palestine” from the Mediterranean Sea to the Jordan River. 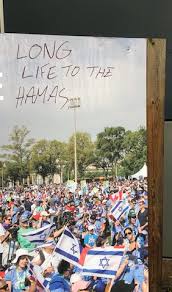 A UJA Federation campaign sign outside Beth Sholom Synagogue, near the Leo Beck school, was also defaced. Beth Sholom is the synagogue I attended, as did my parents.

On the same day, anti-Jewish campaigners slapped stickers on Israeli-made products encouraging shoppers to boycott them. This happened in a predominantly Jewish neighbourhood. This is the work of the BDS campaigners who include Muslims and members of many churches in Canada.  The accusation of “apartheid” or segregation, is based in quick sand. Would an apartheid state transplant the heart of a dead Jewish baby into a Palestinian baby, Musa, from Ramallah in the West Bank, in the hope of saving him?

So where are the reports in main stream media? Found one on Global TV and cp24.  The police are investigating the graffiti as an act of mischief!

Can you imagine the uproar had it been a Muslim school?

Where is the concern from our Prime Minister? Here is a man who tweeted when a young girl claimed that someone attacked her for wearing a hijab. Before the police could verify it. And in the end they couldn’t. The young girl lied.

From the Prime Minister almost three hours after the police report and tweet:

My heart goes out to Khawlah Noman following this morning’s cowardly attack on her in Toronto. Canada is an open and welcoming country, and incidents like this cannot be tolerated.

“Canada is an open and welcoming country and incidents like this cannot be tolerated.”

He was disgusted by the Islamophobia!

The Prime Minister said he was relieved that the incident hadn’t in fact taken place.

“We are a country that defends freedom of religion, freedom of expression, and people’s rights to go to school without being fearful or harassed,” he said. “This is fundamental to who we are.”

But this Jew hatred is not worthy of his concern? Three incidents just two days after the Carry the Light convention? Maybe it’s coincidence that these attacks happened right after that gathering. Maybe not. But the intensity, the number of them should upset our leader. This is the man who states that we are a tolerant society. Where is the tolerance for the Jewish people in this country? Does he forget the actions of the liberal party, under the leadership of William Lyon McKenzie King in the 1940’s when Jews were begging to come to this country?

No. On November 7, the Liberal government, under the leadership of PM Justin Trudeau, will officially apologize for the 1939 decision to turn away the MS St. Louis, a ship carrying 907 German Jews fleeing the Nazi regime.

And it appears that he is not doing much, if he does anything at all, to stop the hate and these blatant ant-semitic attacks.