Tear it down? It’s all about tearing down freedom.

Victor Davis Hanson wrote “Much of the country believes that America is racist, cruel, and incapable of self-correction of its so-called original sins — without a radical erasure of much of its past history, traditions, and customs.”

How sad is that? 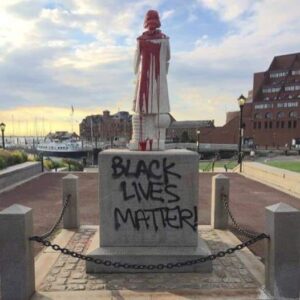 Americans are tearing down statues across the county.  Almost all of the statues refer to the Civil War and slavery. The Civil War is the most pivotal event in American history next to the Declaration of Independence. How does eradicating the monuments related to the Civil War, the removal of statues of Lincoln, who ended the war and abolished slavery, despite the resistance from the Democrats, help in understanding racism in America? 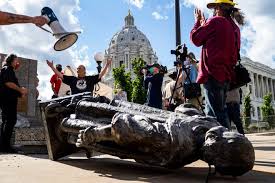 Or perhaps this is not the point of the “book burning.” Perhaps the point is to eradicate all of America’s history from the day Christopher Columbus arrived. Why else are they removing HIS statue? After all, how dare Europeans come to the New World? How dare anyone go to the moon and beyond?

So attack Betsy Ross, the woman who sewed the first American flag, a flag of freedom, a flag too many disrespect. How about the statue of Wisconsin’s Col. Hans Christian Heg, an anti-slavery activist who fought and died for the Union during the U.S. Civil War? His statue was decapitated and thrown into a Madison lake by protesters. The Theodore Roosevelt statue is to be removed from New York’s Museum of Natural History.

Why was the Clayton Jackson McGhie Memorial in Duluth, Minnesota, defaced? The monument consists of the statues of Elias Clayton, Elmer Jackson and Isaac McGhie, three black men lynched by an angry mob in 1920 and hanged from a lamppost after being accused falsely of raping a white woman. Why would anyone fighting against racism remove that statue that speaks to the attacks on black men for “consorting” with white women? Perhaps these anti-racists have never read or seen To Kill a Mockingbird. Has that been “burned”?

Why the attack on the Robert Gould Shaw and Massachusetts 54th Regiment Memorial in Boston? The bas-relief sculpture was created at the end of the 19th century to highlight the evil of racial bigotry and pay homage to the black heroes who fought and died in the Civil War.

What is the message in tearing down the statue of Ulysses S Grant, unless one wants to hide the racism in the Democrat Party? Grant’s determination to protect the rights of the freed slaves made him extremely unpopular in the South, and increasingly in the North as well, particularly among Democrats, whose 1868 campaign slogan was “Our Motto: This is a White Man’s Country; Let White Men Rule.” This was their guiding principle throughout Grant’s presidency, and when they won control of the House of Representatives in the 1874 midterm elections, nine years after the end of the Civil War,  the Democrats were able to stymie almost completely Grant’s efforts to protect the civil rights of black Americans. An attack on freedom; a direct attack on the Constitution.

And now Princeton University has announced plans to remove the name of former President Woodrow Wilson from its public policy school.

Here is a link to the many other statues taken down or defaced. As you read their names, ask yourself the purpose of removing them from memory. Who will benefit?

Freedom for all evolves. It cannot be imposed. The Civil War was part of that evolution, just the beginning of the end of slavery. Two steps forward, one step back. All of the facts need to be told and remembered. One cannot learn from one voice. The voices must be diverse; the more voices, the more perspectives, the greater the understanding.  How else will we learn the “why” of history?

Professor Jason D. Hill, a black, gay man born in Jamaica, living his dream in America, writes that postmodernism calls for a decolonized syllabus and indiscriminate vandalism of all statues because they are simply representations of the past and representative of men of a racial orientation. Hacking mindlessly at statues, “decolonizing syllabi,” and ridding educational courses of canonical dead white educators cannot magically bring about a new world order.

Nelson Mandela’s widow Graca Machel has implored anti-racism campaigners not to tear down statues because they serve as grave reminders of past atrocities.

I believe even it might be much more positive to keep them because you are going to tell generations to come “this is how it started and this is how it should never be.”

It is not the issue of bringing down a statue which is going to resolve the ills of the past.

What is important is to look at the history of what is it which brought us to the situation where we are.

And of course you have to see who are the architects of the past. But I believe even it might be much more positive to keep them because you are going to tell generations to come “this is how it started and this is how it should never be.”

So I’m not really concerned with bringing down and breaking the statues. I know this is controversial but, you know, we need to have the memory and some of those symbols remind us, and they make the memory still valid.

I agree. If you tear everything down, burn it, remove it, deface it, how will you tell your story: your story about the evils of slavery and those who permitted it, including the clergy, for decades. How will you teach your children and your children’s children about the history of America when a chunk of it has been removed? How do you refer to those who no longer exist? How do you talk about the evolution of freedom if you remove the books that tell the stories of that time in the language of the time?

How do you teach that the greatness of America lies in its Constitution that incorporates the Judeo/Christian ethic that all people are born with equal intrinsic value, all life is sacred and we have free will. Free will; moral agency. We have the right to choose our path. While slavery prevented that right to individual freedom, the Constitution, called upon by both President Lincoln and Martin Luther King, demanded that freedom. And that Constitution demands freedom for all. The ethic underpinning the Constitution in America makes the evolution of freedom mandatory. No other ethic, anywhere in the world at any time, has demanded freedom for all.

To remove history is to remove the lesson of freedom.