The time has come: Canada must find a way to legally remove a dangerous Prime Minister

“People who are more vengeful tend to be those who are motivated by power, by authority and by the desire for status.” Ian McKee of Adelaide University in Australia

He “forgets” that we have inalienable rights that he cannot take away at will.

Whereas Canada is founded upon principles that recognize the supremacy of God and the rule of law:

In response to the Trucker Convoy coming to Ottawa, the capital of Canada, the people’s city, to call for the removal of the business breaking Covid mandates, our PM said:

“It was a true inspiration to see people step up to defend their lives, defend their community, defend a bright future for themselves and their families in the country they love.”

Well, good to know that our PM wants people to defend their community in Ukraine -just not in Canada.

Guess he isn’t calling for the use of an Emergencies Act over there to stop free speech and the right to protest over there!

Justin Trudeau enacted the Emergencies Act claiming the RCMP had requested the action. OOPS. He lied. But isn’t that what all dictators do to get what they want? In America, a President can be impeached for lying. Why do we not have the opportunity to impeach a lying Prime Minister?

Seems his enactment of the Emergencies Act upset some European leaders.

“A prime minister who openly admires the Chinese basic dictatorship, who tramples on fundamental rights by persecuting and criminalizing his own citizens as terrorists just because they dared to stand up to his perverted concept of democracy should not be allowed to speak in this house at all.”

She ended her speech by telling Trudeau he was a “disgrace for any democracy” and “Please spare us your presence.”

Would that we could be spared his presence. Well, he does do a Houdini rather frequently: disappears whenever he fears having to face questions from the House of Commons and the people. Or needs a photo op like the one he took in Ukraine on Mother’s Day. Note the mask wearing in Canada but not in Ukraine a few weeks later – with the lowest vaccine rate anywhere. What a hypocrite. 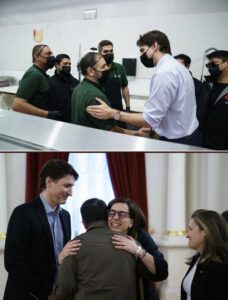 In Australia Craig Kelly called out Trudeau for an abuse of human rights regarding his actions during the Trucker Convoy.

Forget Europe and Australia.  Our illustrious leader was apparently shunned by the Lafleur Family at Guy’s funeral.

Trudeau, the Prime Minister of Canada, stated that Canada has no core values.

So wrong. So disloyal. So treasonous. 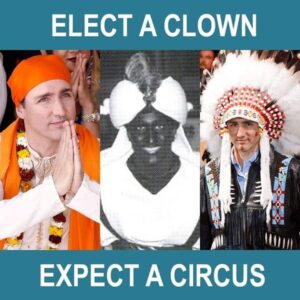 The Parliament of Canada affirmed the Canadian Nation is founded upon principles that acknowledge the supremacy of God, the dignity and worth of the human person and the position of the family in a society of free men and free institutions..

Then in 1982 when the Canadian Constitution was repatriated from Britain the Canadian Charter of Rights and Freedoms included the statement that “Canada is founded on principles that recognize the Supremacy of God and the rules of law.”

In other words, Dear Leader, Canada does have core values; they just aren’t yours.

Trudeau also declared that Islam is not incompatible with the West. Double negative. Not true. I wrote a book about Islam and the West. There is little, if anything, in common. Read what the Imams say. Trudeau, though, seems to appreciate the idea of revenge in Islam; an honour/shame culture. When Canadians refused to obey their Dear Leader regarding Covid vaccines, “Should we tolerate these people” he asked? What? Tolerate your citizens? His answer, of course, is no. I didn’t hear anything from his Liberal Caucus about that.

Well, if the serfs refuse to take the vaccine – he will deny them the right to travel: across Canada or internationally. A little vengeance, Mr. Trudeau? Have you forgotten that God said “Vengeance is mine”? Or that our Constitution says:

“6 (1) Every citizen of Canada has the right to enter, remain in and leave Canada.”

Hmmm what about the science behind removal of rights?  Oh, right, Trudeau would not know science if it hit him on the side of his head. This is a man who declared he didn’t understand math – as he oversees our economy tanking.  His edicts are based on tyranny because he is a wannabe tyrant. And there appears to be no opposition to his edicts.

Then there was the spying on Canadians during the lockdowns.

“The Public Health Agency of Canada used data from cell towers to track 33 million mobile devices as a way to assess “population mobility patterns” during pandemic lockdowns and issued a tender in December to continue tracking location data until May 31, 2023.”

Trudeau is not averse to taking away our freedom of speech, either.

Bill C-261 which replaces Bill C-36  purports to deal with online hate speech but comes with a provision that allows “information to be laid before a court” before an online hate crime has actually been committed, if the complainant believes that the accused is “likely” to commit such a crime.   The complainant—in order to initiate proceedings—has only to convince a judge that he or she has “reasonable grounds to fear” that an offence is likely to be committed. In fact, the gist of the complaint is the “fear of a hate crime.”

A real time take on the Minority Report with Tom Cruise.

This government not only tries to take away our freedom of speech, he is looking into taking away the lives of Canadians. His government is now looking into increasing cost savings to the health care system by using medically assisted death on the poor. Some poor people are agreeing to be euthanized because they cannot afford to live.

A 2020 report by the Parliamentary Budget Office estimated that the 6,465 medically assisted deaths scheduled for 2021 was poised to save $109.2 million in “end of life costs.”

Speaking of the economy, our Tiny Tyrant decided that after two years of locking down the economy and putting small businesses out of business that a new carbon tax would be really helpful to stop…CLIMATE CHANGE! The carbon tax is on top of the rise in prices because of inflation. He is killing Canada.

Meanwhile, our PM is flying around the world in his private plane to share his views  and protect the planet. He flew 127,147 kilometres, equivalent to about three trips around the Earth —aboard government aircraft over the past 10 months. Nothing would stop him from getting his word out – even during the lockdown.

It is not as if our Dear Leader had a resounding win in the last election. Of the 62.5% of people who voted in the last election, only 32.6% of them voted for Trudeau. As a matter of fact, the Conservative party received more votes; 33.7& but in our system it isn’t the votes, it’s the number of candidates elected. In order to continue unabated to be PM, he has made a pact with the Leader of the NDP, Jagmeet Singh, a man who has declared that Israel has no right to exist. Singh has agreed he will not call for a non-confidence vote, the only way to remove Trudeau. A Toronto Sun editorial wrote that the actions of Trudeau and Singh may be “how a kangaroo court works. It has no place here. It avoids scrutiny and makes a mockery of the parliamentary system that’s the bedrock of our democracy”

And even Quebec is upset. With the Liberals! QUEBEC! Bloc Quebecois House leader Alain Therrien said the Liberal government, enabled by the NDP, is creating a, “parallel Parliament with its own rules.” The new “confidence agreement” between the NDP and the Liberals is now undermining the institution itself and allowing Trudeau to act with impunity.

Why would our PM let the Constitution get in the way of his views? He seems to be more loyal to the World Economic Forum.

Sadly, the removal of a PM is not subject to any kind of formal recall except one organized by his or her own party to remove him or her. Don’t hold your breath Power is an aphrodisiac. There is convention that allows the Governor General, through her reserve powers and as the last arbiter of responsible government, to replace a PM that is operating unconstitutionally or above the law. The power was used in the late 1800s to replace a stroke-ridden John A MacDonald.

Canada must find a way to prevent another Prime Minister with delusions of tyranny from staying in power. Or we will all fall.

Freedom of conscience is an inalienable right in all humans, which, when guided by reason, enables them to resist state coercion and pursue the truth~John Locke

You can read more about Trudeau here