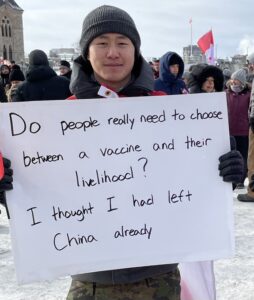 There is a stench in the air over Canada’s capital city, Ottawa, and it isn’t coming from diesel fuel. No, it is coming from the odious fumes of main stream media at the behest of our Dear Leader, Justin Trudeau.

The Globe and Mail, one of Canada’s major media outlets has just informed us that the Freedom Trucker Convoy is a right wing phenomenon with a sharp America feel. According to the author, Ian Brown, it is an “.. . unapologetic Trumpy aggressiveness.” It seems the Convoy seconded the flag for nefarious reasons. Who knew? Too many flags apparently are the problem. Once again, I have to ask, like prunes, are three enough are six too many?  Professor Peter Astor  is concerned about “the convoy organizers’ promiscuous flinging of the word freedom. “I realize you’re not dealing with PhD students but there is no such thing in democracy as absolute freedom.’” And saying something like “FUCK TRUDEAU” is a stoop too low for Canada. This was too much for Professor Astor. He was shocked. SHOCKED. He’s positively distressed! No one said that about Mulroney or Pearson.  Hmm, I wonder why. 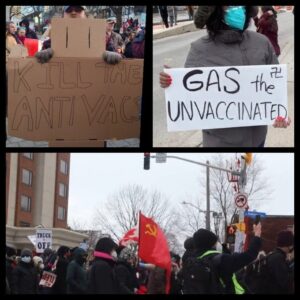 Not a word from the Globe and Mail.

Ian Brown introduces us to Forrest Just, a vexillologist, people who undertake scholarly investigations of flags. Mr. Just tells us that the convoy’s flag draping looks like a tactic. “Cynically, I think they might be using the Canadian flag because the optics would look really bad if the police or authorities were to start to move the protesters and trucks out of the way.”

Ian Brown tells us “racists and neo-Nazis have ties to organizers of the convoy, at least one of whom has stated his intention to dismantle the federal government.” Why even Elon Musk has supported the truckers. Is he a racist or a neo-Nazi? Ian Brown is upset because to him the flag is being abused by these TRUCKERS. It seems the protesters are draping themselves in the flag, “not because they believe in a kinder gentler Canada … but, rather, if I understand Dalhousie University Will Langford correctly, it is a right wing extremist thing to do.

Professor Shirley Tillotson, University of King’s College historian, said the problem, now, of course, is that “if white supremacists are flying Canadian flags, then every time I see someone with a Canadian flag, now, I’m going to think, yeah, that’s a crazy right winger.” It’s as if the Canadian flag has been stolen from us.

Hmmm I’d love to know who is the “us,” because it doesn’t include me.

Speaking of “Nazi,” I am not fond of people throwing around the word “Nazi.” Our PM was very worried when he saw a Nazi flag in the crowd of Canadian flags.

He said,  “freedom of expression, assembly and association are cornerstones of democracy. But Nazi symbolism, racist imagery, and desecration of war memorials are not.” He will not tolerate Nazi symbolism. I guess it is because it symbolizes the horrors of WWII and especially the murder of 6 million Jews for the crime of being Jewish, Yet, this man, Justin Trudeau stood with Iran and Korea against Israel – you know the Jewish state, at the UN. Yup, my Prime Minister cares.

In another article in the Globe and Mail,  Daniel Panneton, writer, educator and online hate researcher said the Freedom Convoy includes a “Motley array of Western separatists, anti-vaxxers, conspiracy theorists, anti-Semites, Islamophobes and other extremists…Several of the convoy organizers have a history of white nationalist and racist activism, a fact extremism experts at the Canadian Anti-Hate Network (CAHN) emphasized repeatedly prior to the convoy’s arrival in Ottawa.”

CAHN,  the Canadian Anti-Hate Network is an independent, nonprofit organization made up of Canada’s leading experts and researchers on hate groups and hate crimes. Bernie Farber is the chair.

What a shock when it was revealed that Farber posted a picture of an antisemitic flyer and said it was “taken by a friend in Ottawa at the Occupation. Apparently in plain sight.”  (He is the man the CBC contacts about hate).

If you want to know more about Bernie Farber and his fight against “hate,” please read my book #FakeNews in the Era of Donald Trump, available for free on PDF.

The Globe and Mail interviewed residents of Ottawa who are distraught over the convoy-interfering with their daily life. As if no one had been affected by the lockdowns of two years. Amazing, to me, how sanctimonious, self-serving, self-righteous people are out and about complaining about the convoy when they stayed silent over the destruction caused by the lockdowns. Interesting, isn’t it, that Johns Hopkins came out with a study that the lockdowns were terrible.

The study states that lockdowns “imposed enormous economic and social costs where they have been adopted.” Researchers ultimately came to the conclusion stating, “lockdown policies are ill-founded and should be rejected as a pandemic policy instrument.”

Hmmm. Took two years to come to that conclusion, one many of us watching what was going around us had already concluded. Early on. Fascinating that the same people who called for these useless, if not dangerous lockdowns, are still calling the shots!

Well, these citizens felt intimidated by the Convoy, made up of families and people of all races and colours, including Indigenous people drumming. How dare they! An Indo-Canadian, Abhiram Santhosh, said that for the first time he felt unsafe in Ottawa. Hmm. I saw lots of Indo-Canadians in the Convoy, calling for freedom. A Jewish couple stated they were intimidated by a Nazi flag. A Nazi flag in a field of Canadian flags. I’m Jewish and cannot understand how any Jew, today, would be intimidated by one Nazi flag in a field of Canadian flags.  A perfect opportunity to go over and flip the bird.

No views by members of the Convoy were shared. Didn’t want Canadians to know how many happy children are there with their parents fighting for freedom from tyranny. Yes, this is tyranny when a PM refuses to speak to those who have grave concerns over their individual freedoms – like not being forced to take a vaccine.

The Globe and Mail also introduced us to the “leaders” of the convoy. They did their very best to paint them in the worst light. BJ Dichter, the one responsible for fund raising, is apparently an Islamophobe. Subtext: he is a racist and has an irrational fear of Islam. He is referred to as the Bitcoin booster who dreads “Political Islam.”  In a speech to the People’s Party of Canada he “alleged Islamic front groups were infiltrating the political institutions.” Dichter said “The adaptation of political Islam is rotting away at our society like syphilis.”

Hmm. Is it irrational to fear when Muslims scream “Death to Israel,” “Death to the Jews” or “Palestine will be free from the river to the sea” which means the elimination of the Jewish state? And if Mr. Dichter, a man I met, a kind respectful young man, is an Islamophobe, what does that make me? I wrote an entire book called The #IslamophobiaIndustry: The Insidious Infiltration of Islam into the West.”

ICNA (Islamic Circle of North America) Canada is an Islamic nation-wide organization striving “to build an Exemplary Canadian Muslim Community” by “total submission to Him [Allah] and through the propagation of true and universal message of Islam.” And “The political system of Islam is totally incompatible with western democracy. The concept of government party and the opposition is alien to Islam. All belong to one Ummah with only one goal and pursue the same aims and objects of Islamic guidelines.”

“Democracy is nothing else but something which gives you the right to choose anything. The biggest shirk [Arabic term for idolatrous and heretical polytheism] is when you give your own self the right to choose whatever you want. So, democracy, in no terms, is compatible with Islam

AbdulAdhim is a prominent Canadian Muslim scholar and Imam of Iraqi descent who is affiliated with the pro-Caliphate Islamic global movement of Hizb ut-Tahrir. On January 17, 2019, Mazin AbdulAdhim posted the following on his Facebook page:

“In terms of morality, the West is absolutely a cesspool of corruption and depravity. The Zina [fornication, adultery], pornography, homosexuality, drinking, Mazin drugs, etc., are not only widespread, but they are completely and totally accepted as normal– to the extent that anyone questioning or speaking out against these things are shunned and attacked. The Muslim lands are a saint-haven in comparison, except for whatever has been influenced by the West’s way of life.”

Today, it is unconscionable to criticize Islam; we are being silenced, but there’s no problem when Muslims attack our values. Interesting.What is the expression for that?

I am proud to say that Tom Quiggin, another Convoy leader, wrote the Forward to my book. Tom is a former federal intelligence analyst who works on “Protecting intelligence” for the convoy. He was in the PCO, the Privy Council Office; which serves Canada and Canadians by providing professional, non-partisan advice and support to the Prime Minister, the ministers within the Prime Minister’s portfolio and Cabinet, and the RCMP, the military and in international arms inspection before he left government in the early 2000’s.

Do these people sound dangerous to you?

And, there you have it. Canada’s main stream media stinking out the place with their opinions based on their biases and hopes, not facts. The media wants you to hate the thousands upon thousands of people who have stood outside in freezing cold air calling on our PM to return our freedom. Return it. Because for too long we gave our government the belief that they could take it from us. 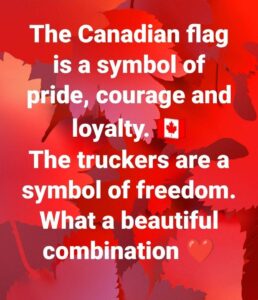