White Supremacy brought to you by an East African, Black, Muslim Woman

“I have a dream that my four children will one day live in a nation where they will not be judged by the colour of their skin, but by the content of their character”. Martin Luther King Jr.

Experts have inundated us with lectures and books about white privilege. According to these experts, “White supremacy is arguably the most complex social system of the last several hundred years.” White privilege, rather the evil of white privilege/white supremacy, is being taught in our schools, and not just universities. Are there white people who believe they are better than others because of the colour of their skin? Yes. And we are working hard to undo the damage of those beliefs. Seems we have not learned any lesson from those biases. Today, the path is to attack white people; for being born white and therefore innately superior and privileged.

Who are these “experts” whose books are being promoted to teachers and schools and the rest of society?

One is Layla F Saad and her book, “me and white supremacy,”a resource for white people.

The book came about following her free month-long Instagram challenge during the summer of 2018. She knew her audience. Her book has also been recommended for teachers to read so they can look inside themselves and find that active and passive racism that lurks within, and work diligently to remove it. She describes herself as an East African, Black, Muslim woman, born in Cardiff Wales, living for a time in Great Britain, before moving with her family to Qatar, where she now lives with her husband and children.. She thinks of herself as sitting at “a unique intersection of identities” from where she can help white people “work with the intention of creating a new world where Black, Indigenous, and People of Colour (BIPOC) live with dignity and equality” and remove “oppression and marginalization.”

Let’s take a look at her life; how she was influenced to be not only the woman she is, today, but an expert in white supremacy/privilege.

She is wearing a Hijab which indicates she probably takes her Muslim background seriously.  What does that mean? First, she is not equal to her husband, brother, father or son. She is oppressed at home by her own family.  According to Amnesty International in Qatar 2019:

“Women continued to face discrimination in law and practice. Family law discriminates against women, including by making it much more difficult for women than men to seek a divorce, and placing women at a severe economic disadvantage if they seek a divorce or if their husband leaves them. Women also remained inadequately protected against violence, including within the family.”

She may not see it that way, may not be aware of her oppression/suppression, but male supremacy is the way in Islam.Twenty five percent of the world is Muslim.

She comes from a belief system that says all non-Muslims are second class. Lesser than. Do not have equal rights with Muslims. It is called dhimmitude. As a Muslim woman she has privilege over non-Muslims. Back in the past during the Caliphates, Jews had to wear yellow stars on their clothing. Sound familiar?

She says a prayer, the Al Fatiha, five times a day that demeans, denigrates and dehumanizes Jews and Christians.

As for its virtue, it is narrated from the holy Prophet (S) that:

“The reward of any Muslim who recites the Surah ‘Opening’, is like that of a person who has recited two thirds of the Qur’an, and so much reward would he receive as if he has given every believing Muslim, man or woman, a free will offering “

This idea was formed because of the particular responses that these two groups showed in reply to the invitation to Islam. For, as the Qur’an has clearly pointed out in different verses, the misguided Jews used to show a special grudge and enmity against the invitation of Islam, though, at the beginning, their scholars and learned men were the bearers of the glad tidings of Islam.

Very soon, though, under the effect of deviation of thought, belief and notion, and, also, because their financial gains were being endangered, they became the most obstinate enemies of Islam and they did whatever evil they could against the progression of lslam and Muslims.

(Even today, Zionism and Zionists hold the same position regarding the manner in which they treat Islam and Muslims.)

But, the misguided of the Christians, who upon encountering with Islam were not so grudging, but were misled because of their misperception of the Divine religion and therefore refusing the Truth, were rendered into / dallin / ‘ those gone astray’.

They believed in the Father, the Son, and the Holy Ghost instead of clinging to true Monotheism, the worship of Allah. This is, in itself, one of the greatest examples of ‘astray’ and ‘aberration’.

She is an expert on white supremacy.

She is well aware of the Hadith that declares all Jews must be murdered.

Here is a segment of hadith 2922 which Muslims, particularly Imams, repeat on a regular basis.

It is narrated in the hadith that the Prophet (blessings and peace of Allah be upon him) said: “The Hour will not begin until you fight the Jews, until a Jew will hide behind a rock or a tree, and the rock or tree will say: ‘O Muslim, O slave of Allah, here is a Jew behind me; come and kill him – except the gharqad (a kind of thorny tree).’

She has lived for some time in Qatar. The country hosting the 2022 FIFA games, Qatar turned to some of the poorest places on earth — to countries like Nepal and India and Bangladesh, and others in Southeast Asia and Africa — to find cheap labour.  It is estimated there are 1.4m migrant workers in Qatar (approximately 88% of the population). They fuel the “kafala system,” a quintessential exploitative scheme that the government has pledged to dismantle but persists nonetheless. Under Qatar’s “kafala” (Arabic word for sponsorship) system, migrant workers must obtain their employers’ permission – a no-objection certificate (NOC) – before changing jobs, a law that rights activists say ties them with their employers and leads to abuse and exploitation. Recruiters seek out unemployed foreigners who need work to feed families. They promise relatively well-paying jobs in Qatar. The unemployed foreigners, envisioning stable wages they can send home, take out loans and make often-illegal payments to the recruiters. In return, they claim one of these coveted jobs abroad.

But in doing so, these people essentially sign their life away to Qatari companies. The companies all but own them, which is why experts have likened the system to slavery. The migrants live in cramped, filthy labor camps. They can’t leave for another job or go home without permission from authorities.

Qatar, it is clear, could pay workers decently. It owns the highest GDP per capita in the world, and a 12-figure sovereign wealth fund.

Qatar is in the midst of changing these “laws.”

But this woman is an expert on white supremacy.

And then there is Qatar’s involvement in terrorism. Money trails from Qatari banks to the Muslim Brotherhood have exposed Qatar’s continued funding of terrorist groups across the world.

Do you think living in Qatar has helped this woman come to understand white privilege? Perhaps being a Muslim, taught that Muslims are superior to all non-Muslims, that slave labour is acceptable, that Jews are to be murdered, enables her to better understand supremacy?

Is this the kind of person you want influencing your family, your children, about white supremacy/white privilege?

Now, if this book doesn’t help, you can try one of the 40 on this list  that provides this advice.

“Lots of books will make you feel comfortable with your whiteness and whiteness in general, even for people of color. Authors have been sparing your feelings and treating you like porcelain, but it’s time to let the bull loose in the proverbial china shop. White fragility needs to take a back seat. Fall back Karen. It’s time to talk about dismantling white supremacy culture and bringing folks of color (the global majority) to the center.”

Sadly, you missed out on a two-day workshop about white privilege. 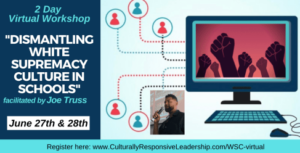 You, too, can participate in teaching your non-racialized child – born with white skin – that he needs to look into his heart and see the evil. It has nothing to do with his soul – only the colour of her skin.

Tell me again about white supremacy/privilege.

We have come full circle.

“I have a dream that my four children will one day live in a nation where they will not be judged by the colour of their skin, but by the content of their character”. Martin Luther King Jr.