Why was Justin Trudeau not thrown out on his behind after his evil comments about Canadian Citizens? 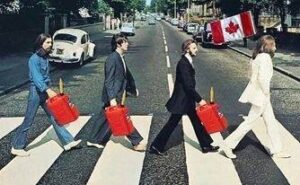 Why was Canadian Prime Minister, Justin Trudeau, not thrown out on his behind after he attacked Canadian citizens? His evil words were heard around the world: “Do we tolerate the unvaccinated?” What?

He has given permission to those who are fearful of a virus to attack the unvaccinated, whether in words or deeds. After all, should we tolerate them? Where were the House of Commons and the media pundits? How about the President of the United State – if he was even aware, or the United Nations or the EU or Amnesty International or the International Criminal Court?

His statement “Do we tolerate the unvaccinated” was hate speech against his own citizens. There was a wilful blindness to those words. I remember another time when a leader attacked his own citizens and that, too, was met with wilful blindness, also around the world.  Remember hitler: Shall we tolerate the Jews, the blacks the gays, the gypsies or Aryan children who are imperfect – who are physically or mentally disabled? Not a word from anyone. And so he carried on.

This is the 21st century and the leader of a democratic country, Justin Trudeau, attacked his citizens. He has given free rein to attack more; as he has the Trucker Convoy for Freedom because no one stopped him.

So why am I writing about this? Because we have shown that we are no better than the people who did not go after hitler. And we know better, or we should know better, because out of the Holocaust a phoenix rose- the Nuremberg Codes: the Codes to stop hateful people, especially leaders from attacking their own citizens. Extraordinary policies that tell individuals that you have the right; no, the obligation; morally and ethically, to refuse to do harm to others simply because of orders.

When we will ever learn? If we look back in history, the answer is: We won’t. We don’t.

More than 75 years ago, a group of people were separated from the others for no reason other than their religion-or race; depending on who is writing the story. The lesson that was to have been learned: we do not separate people based on race, colour, creed, religion nor sexual orientation. We do not “other” them, scapegoat them and then destroy them as if they were termites, a statement made by hitler and Louis Farrakhan, the leader of the Nation of Islam.

There have been tragedies since then where people once again just followed orders. For me, though, Covid is a “light-bulb” moment. Living through these past two years I came to truly understand the power of fear and how it warps people.

I have come to better understand the German people in the 1930’s, who elected hitler. Do you think the well-educated Germans who had voted for hitler had any idea when hitler came out with the Nuremberg Laws (do we tolerate the unvaccinated) that he and his minions would then gather up Jews and other undesirables and send them to the gas chambers, and that they would either stand by, in fear, or assist?

In Canada we elected Justin Trudeau five times since 2008. Did the Canadian people ever expect him to destroy our economy, our lives and then turn around and ask “Do we tolerate the Jews, oops, I mean the unvaccinated?”

For all those who think of themselves as better than the German people in 1930’s I have a story for you. I shared it in my book Back to the Ethic: Reclaiming Western Values.

I am going to take you back to WWII.  To Chambon-sur-lignon. I leave you with a question at the end.

In 1940, in the early stages of World War II, it took Germany a mere six weeks to conquer France. For two years afterward, France was divided between the northern occupied half and Vichy France in the south. Thousands of Jews who lived or made their way to the south survived in relative peace for two years. About 5000 Jews, mostly children, made their way to a small Protestant town, Le Chambon-sur-lignon, located in the mountains 350 miles south of Paris. In 1942, the Germans went into southern France and began to round up the Jews to send them to concentration camps, where they would be murdered.

There were approximately 5000 residents in the village of Le Chambon-sur-lignon. They were proud descendants of the first French Protestants, the Huguenots, who had been persecuted by the French government of King Louis XIV for their religious beliefs. The village, which became known as “that nest of Jews in Protestant Country,” was also a place of convalescence for German soldiers. In other words, the locals’ next-door neighbors were Nazis. Yet the families of Le Chambon-sur-lignon still sheltered every Jew who came to their village. They did this knowing full well that they were defying the French government, which was collaborating with the Nazis. The villagers provided the Jewish refugees with food, education, forged identification papers, and they also escorted many to Switzerland and freedom.

When you read this story, can you see yourself in it? Do you see yourself sheltering someone for whom you will be killed if they are discovered? Think about it. You have no connection to these people. They were never your neighbors. You didn’t interact with them, or share food or holidays. They were complete strangers to whom you owed nothing. Can you envision yourself putting not only yourself in danger to save these strangers, but also putting in danger your children and anyone else living under your roof? Do you see yourself as someone who could keep this deed a secret, even from your next-door neighbor? Would you deprive your own children of food in order to feed strangers in your midst?

I doubt I would have hidden the Jews in my home for fear of harming my children.

These people showed incredible courage. They had strong belief in God. Who told us 365 times do not fear – for I am your Lord your God.

For those who look down upon the Germans (not the Nazis, the SS, the Brownshirts and their minions) – the German people of the 1930’s, take another look at yourself.

What we have done during Covid  is exactly the same as the German people. We caved to fear and hate mongering – by our own leaders.  Because we did not learn from history.

I keep coming back to the Holocaust because I see so many similarities between then and now in the behaviour of politicians, scientists, media, citizens, families.  In Germany, people wanted to live their lives; go to work, care for their children. The same things that families want, today.  During Covid our leaders and Doctors divided us into essential and nonessential people; the clean and the unclean; the vaccinated and the unvaccinated with rules for each group; where you could go, what you could do, with whom you could socialize. A 21st century version of the Nuremberg Laws.  Where was the outcry?

This was done all over the world.

And that fear of Covid was spread far and wide by main stream media, a media that did not question anything. Just pushed out the government propaganda, like Goebbels. I believe one day people will feel betrayed by their media as were the Germans.

Edicts came to us from the WHO via China and then shared by people, like Fauci. Where was the outcry?  Instead we caved, slowly but surely as the non-essential suffered the most. They lost their family businesses, their small businesses, their livelihoods, their families self-destructed, children committed suicide and died from drug overdoses. Our entire society was turned up-side down by well-meaning every day citizens just following orders, I mean edicts, from our duly elected leaders promoted by our propagandists, I mean media. Today, people are screaming about auto plants shut down by the Trucker Convoys for Freedom. How dare they? Where were these same indignant people when their neighbours lost their livelihoods for  TWO years!

Why did we do this? Why did the Germans do this?
FEAR. The Power of fear.

Fear is our biggest enemy, and too often, as we did during Covid, fear let us bend the knee to false gods. Some went out of their way to snitch on neighbours and friends. Giving them up to the police. Like the Germans. I often wonder what would happen if our governments, and in particular Justin Trudeau, decided to move the non-vaccinated to quarantine camps so the rest could go back to “normal”? How many people would give up the non-vaccinated? How many would snitch on neighbours if they were threatened with loss of their freedoms? How many would protect them?

As a proud Jew, a proud Zionist, I am disappointed in the response by too many Jews to the edicts of Covid. It’s been two years. Dear Jews, where are we? Where were we? Where were our Rabbis? We, who live and breathe the Holocaust where 6 million souls were taken for the crime of being the “other,” why did we not stand up and push back the moment we were divided into two groups, pitted against each other by human beings when God tells us that all life is sacred and that we are all born with equal intrinsic value?  Where were you Dear Rabbis when Justin Trudeau, a true Nazi, asked if we should tolerate the unvaccinated? A soundbite heard around the world. That was the moment we were tested. And we failed. We did not learn from the past. We did not learn the universal lessons of the Holocaust, nor have we taught them universally. Had we truly learned, we would have been the leaders of the protests for freedom. We would be standing with the Trucker Convoys for Freedom.

After all we experienced, is it not time to have empathy for the German people?

If not now; when?