Generations of Jews Kidnapped by Aliens

“Israel is the very embodiment of Jewish continuity. It is the only nation on earth that inhabits the same land, bears the same name, speaks the same language, and worships the same God that it did 3,000 years ago. You dig the soil and you find pottery from Davidic times, coins from Bar Kokhba, and 2,000-year-old scrolls written in a script remarkably like the one that today advertises ice cream at the corner candy store.” ~Charles Krauthammer, “Z”L” Of blessed memory.

Two generations of Jews have been kidnapped by aliens who culturally appropriated, and then abused, our sacred teachings about social justice introduced 3500 years ago by the Jewish people; revealed in the desert, no man’s land, to symbolize that these teachings belong to all.

Two generations of Jews have been raised on the lies and deceits spread about the Two-State solution and the Oslo agreement, and that all you need is love; but that isn’t enough. We have learned this throughout history.

These are the Jews  who say Kaddish for Hamas because their knowledge of Torah, Talmud and Rabbi Hillel have been filtered through Social Justice Warriors who have disdain for the Jewish state because it is Jewish. Would these Warriors have said Kaddish for the Nazis in the name of IfNotNow? Wouldn’t it be a mitzva if they lit a candle on Yom Kippur for the millions of Jews who were eradicated by people with similar views towards the Jews as the ones for whom they just said Kaddish?

And there are “Jewish ”organizations like Jewish Voice for Peace, which promoted a campaign against Birthright Israel, dubbed “Return the Birthright”, calling on Diaspora Jews to boycott the programme.

“They set up a table with a sign and snacks and when the groups arrived they turned to them as they waited in line,” said one of the group members, Miss Ariel Tidhar. “They told them they had to learn the truth about the State, and claimed that Birthright was working against Jewish morality.” Operatives demanded “to stop American-Jewish support for the occupation.”

Have these Jews been infected with the Stockholm Syndrome? Is there no release from shtetl mentality and fear of being Jewish in public? Have we returned to the way of life lived in 1930’s Germany?

Now more than ever we need Hasbara to armour our people; especially our young people who so want to be loved by others-even though love is not enough.

I looked up the meaning of Hasbara on Google to get a proper, easily understood translation of the word. And I came across a series of negative stories. Mostly that Hasbara means Propaganda-lying.

And from Jewish media outlets.

“Some would say that hasbara is a “laundered word,” the term used by David Grossman in his book “The Yellow Wind” to describe innocuous words used by Israelis to cover up inconvenient truths, and that hasbara’s true meaning is propaganda. But that equation totally misses the essence. While propaganda is invariably a mixture of half-truths, fabrications and downright lies, hasbara generally employs a highly selective version of true facts.”

And then a sample from an Arab outlet:

We must prepare our tender Jewish souls so they can speak intelligently and calmly about the facts about Israel and the Jewish people, for we are the people who blessed- and perhaps cursed-the world with ethical monotheism; absolute ways of living in the world, living with others through the lens of the dignity of all life, because all life is sacred. Keeping the last five commandments is difficult.

Freud was so worried that the world would continue to come after the Jews for this ethic and continue to kill the messenger that he wrote the book  Moses and Monotheism and tried to prove that Moses was Egyptian and that “monotheism was not a Jewish but an Egyptian invention, descending from the cult of the Egyptian sun god Aton.”  I believe his intention was to deflect the hate away from Jews.

Now more than ever we must teach our young people about “Palestine” and the “Palestinian People” who claim to be the indigenous people of the land, when in fact they are a fabricated people, made up by the Russians in the 1960’s and shared with the world by Yasser Arafat at the United Nations.And the world was so quick to accept this fake people-because it assuaged their innate Jew-hatred that had been squashed for decades following the Shoah. 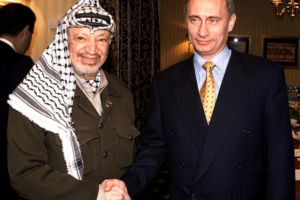 Then came the Six Day War where, against all odds, the Jewish state once again defeated the far larger Arab contingent. This brought more shame upon the Muslims for they live and die in an honour/shame culture. No shame can be greater than being defeated by Jews.

“In Saheeh Muslim (2922), it is narrated from the hadith of Abu Hurayrah that the Messenger of Allah (blessings and peace of Allah be upon him) said: “The Hour will not begin until the Muslims fight the Jews and the Muslims will kill them, until a Jew hides behind a rock or a tree, and the rock or tree will say: O Muslim, O slave of Allah, there is a Jew behind me, come and kill him. Except the gharqad (a thorny tree), for it is one of the trees of the Jews.”

The late historian Robert S. Wistrich wrote in A Lethal Obsession, the Six-Day War unleashed a protracted, intensive campaign on the part of the Soviet Union to delegitimize Israel and the movement for Jewish self-determination, known as Zionism. This was done in order to rectify the damage to the Soviet Union’s prestige after Israel defeated its Arab allies.

After 1967, the USSR began to flood the world with a constant flow of anti-Zionist propaganda. Only the Nazis in their twelve years of power had ever succeeded in producing such a sustained flow of fabricated libels as an instrument of their domestic and foreign policy.

Arafat was an Egyptian bourgeois turned into a devoted Marxist by KGB foreign intelligence. The KGB had trained him at its Balashikha special-ops school east of Moscow and in the mid-1960s decided to groom him as the future PLO leader. First, the KGB destroyed the official records of Arafat’s birth in Cairo, replacing them with fictitious documents saying that he had been born in Jerusalem and was therefore a Palestinian by birth.

The KGB’s disinformation department then went to work on Arafat’s four-page tract called “Falastinuna” (Our Palestine), turning it into a 48-page monthly magazine for the Palestinian terrorist organization al-Fatah. Arafat had headed al-Fatah since 1957. The KGB distributed it throughout the Arab world and in West Germany, which in those days played host to many Palestinian students….

Arafat was an important undercover operative for the KGB. Right after the 1967 Six Day Arab-Israeli war, Moscow got him appointed to chairman of the PLO.

But we don’t teach these facts. Why not? If we started at the very beginning of the “Palestinian” story we would not accept the views of those who want Israel diminished,again. For her territory was reduced by three quarters in the 1920’s when Britain illegally and unilaterally gave away the area now called Jordan to the Arabs, because they didn’t like the Jews.

Perhaps it is the echo of thousands of years on the run; the persecutions, prosecutions, inquisitions, expulsions and the death of millions of Jews in incinerators that has affected our collective Jewish psyche. Perhaps the haunting memories push us to be still, to be quiet, to continue in the footsteps of Rabbis like Stephen Wise who told the Jews in in America during the Holocaust not to make waves.

Thousands of years of fear have set the table for more fear. But we are no longer a people wandering in the desert. The Jewish people have their state; a state with thousands of years of history-from archeological proof, including coins from the year 69 C.E with the words  “For the Redemption of Zion” in ancient Hebrew lettering to legal documents found in Genizas in the Middle East. We are mentioned on the steles in Egypt and the arches in Rome.

We are not interlopers. We have not taken anyone’s land, but resettled legally and historically on our own land. And we must teach this. We are obligated to teach the history of Zionism. There are remarkable books that tell the truth. From Joan Peters’ book, From Time Immemorial that was requisitioned by President Carter in order to promote the history of the Palestinian and back-fired; to the Oslo Years A Mother’s Journal by Ellen Horowitz and the late  Salomon Benzimra’s work The Jewish People’s Rights to the Land of Israel.

These are books that must be taught in our Jewish schools and Hebrew Schools. The Reform, Reconstructionist, and Conservative movements owe it to our future to teach the past- as it was and not as the antisemites wish it to be.

“Some geopolitical conflicts are morally complicated. The Israel-Gaza war is not. It possesses a moral clarity not only rare but excruciating. […] For Hamas, the only thing more prized than dead Jews are dead Palestinians.” ~ Charles Krauthammer, of blessed memory.