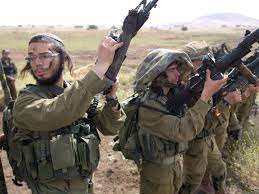 The number of Jewish families and young Jews who hide their Jewish symbols speaks to the massive failure of the plethora of Jewish organizations to fight Jew hatred and anti-Zionism. We have witnessed religious Jews attacked walking down the road. Students attacked on campus.

When do we say Dayenu? Enough! Jew hatred is not rational. It is embedded in the DNA, the blood, the tissue, the very fibre of their being in billions of people.

In the 3000 year history of Jew hatred, many of us thought the Holocaust would be the end of the hate.

Today, 2022, Jews are the No. 1 target in America for hate crimes in proportion to the population.

Incidents targeting the Jewish community in the State of New York have increased 24 percent since last year. New York State, home of millions of Jews who thought they would be safe.

Reported by CBC, the most antisemitic media outlet in Canada: record levels of antisemitism were recorded in Canada last year, with sharp increases in Quebec and British Columbia. The annual audit by Jewish advocacy group B’nai Brith found there were 2,799 anti-Jewish hate crimes, including beatings, vandalism of synagogues and swastikas in schools.

We have tried writing and talking, over and over. To no avail. If we want to be respected, we must be feared. How shall we make the Jew haters fear the Jews and Israel?

I want to introduce you to White Rose Magazine. The name is auspicious.

“During World War II, in the heart of Nazi Germany, a group of college students made the sober decision to be the voice of sanity in the midst of chaos. They decided that truth needed to be expressed even as they knew the price to be paid for speaking out against the systemic pressures to be silent. Those brave heroes whose story inspired us in 2021 to follow their example were known as the White Rose Society. Their inspiration is our mission.”

The magazine produced a special edition called White Rose Essays, exposing the failure of Jewish leadership to lead the fight against Jew hatred and Israel bashing: The ADL(an international Jewish non-governmental organization), AJC (American Jewish Council), Federations, the JCRCs,( Jewish Community Relations Council) and far too many Rabbis who have failed to respond effectively to these mounting assaults.  We can include CIJA, Centre for Israel and Jewish Affairs  and B’nai Birth in Canada and the USA

And in that edition we were introduced to a new organization, THE JEWISH LEADERSHIP PROJECT.  Will this organization help reduce Jew hatred and protect our people? I hope so because all the money that has gone to our Jewish organizations has failed to reduce attacks on Jews and Israel. We do the same thing over and over and expect a different result. Who was it who said that was insanity?

I often wonder if our Jewish organizations truly want to end Jew hatred. They would all be out of work. They just want to talk about it and call it out and then …wait for the next Jew-hating event to report on.

When is enough, enough?

This is CIJA – how much money do the advocates get paid for sending out emails of their “accomplishments”?

And B’nai Brith sends out B’nai Brief. Great. And then what? Are our children feeling safer? Are they better prepared today to stand up for themselves against the Jew- hating bullies? Can they defend themselves physically? No.

But B’nai Brith wants us to cheer for Jewish Heritage Month in June! Have you heard all about it? Taken in any activities? I know I have been overwhelmed with Pride Month and Juneteenth!

This is where your dollars are going when you give to B’nai Brith. Helping Ukrainian refugees as Jews in Canada and America are under attack on an almost daily basis.  Oh look. Those nice Jews. Caring for people whose recent ancestors wiped us out – with great joy. Yup, that should make the world respect us. And make our children on campus safer.

Now I am reading about a new organization:  Avi Benlolo’s Abraham Global Peace Initiative(AGPI).  It has six pillars: Safeguard, Stand, Make Peace, Speak Out, Advocate, Defend. Reminds me of the Six Pillars of Faith in Islam

The AGPI  is  setting its sights on “moving the needle” when it comes to combating anti-Semitism, “standing up for Israel” and advancing global human rights.  Oh so this organization  will assist in reducing the scapegoating of Jews, a 3000 year project, by universalizing the attack on hate. He said that Canada has a lot to offer to the international community, in terms of its beliefs in freedom, pluralism and inclusivity — all of which could be a model for the rest of the world.

Inclusivity. Like diversity and equity? Well, the DIE policies have been just great for Jews. We are forever attacked as white oppressors, victimizers, colonizers – of our own land!  But don’t let that fact get in the way of your new initiative. Who is paying for this?

And now this. Mapping of Jews.

An anti-Israel hate group called “The Mapping Project” has created an interactive map of many of the locations of 482 organizations which they classify as supporting the “colonization of Palestine” within Massachusetts.  In 1932, the rising Nazi Party created a similar map of Jewish businesses to attack and boycott. We know what happened next.

So the call is out to Jewish organizations – to do what? The same thing the Jews did in Germany? Nothing!

Too many Jews, particularly in position of power, have decided to acculturate, if not assimilate in order to be liked. It didn’t work in Germany. It won’t work here.

What will reduce the hate? Respect. How do Jews gain respect after 3500 years of scapegoating and hate –think Amalek to hitler. Fear. Fear of the Jews  and Israel will reduce the hate. All we read about is fear of China and Russia and now Iran-obtaining a nuclear bomb. I have news for you, Israel has nuclear capabilities. Maybe it’s time to fear Israel. May be its time Israel flexed some muscle. May be it’s time our Jewish leaders flexed some muscle.

Our Jewish history of filled with great warriors. But let’s look to the more recent past.

New York judge Nathan D. Perlman was apparently a big believer in the adage: If you need a job done right, you’ve got to turn to the right people. So in 1938, he called up notorious Jewish mobster Meyer Lansky with a favor to ask of him.Yes, the Jewish people had mobsters!

Perlman called Lansky to a face-to-face meeting and asked him to direct Jewish gangsters to violently break up meetings of the German American Bund, a pro-Nazi organization for Americans of German origin.

In Canada we had Jews fight with bats at the Christie Pits to defend our Jewish people in Toronto.

I think it is time to reconvene the JDL. To bring it prominence. This is how the ADL wrote about the JDL in 2017. Seems to me of the ADL is against the JDL we need the JDL.

In Rabbi Kahane’s gross distortion of the position of Jews in America, American Jews were living in a fiercely hostile society, facing much the same dangers as the Jews in Nazi Germany or those in Israel surrounded by 100-million Arab enemies. Rabbi Kahane believed that the major Jewish organizations in the United States had failed to protect America’s Jews from anti-Semitism, which he saw as “exploding” all over the country. “If I have succeeded in instilling fear in you,” Rabbi Kahane said in the closing statement of his standard speech, “I consider this evening a success.” Looking back, Kahane  was right.

Irv Rubin — Chairman of the Jewish Defense League wrote in 1999.

After the attack on the Jewish community center in Los Angeles: “Those kids at that community center were sitting ducks. We have to realize as Jews that this is going to happen again and again until we learn to defend ourselves, and the only way to defend yourself is to fire back.” The Sacramento Bee, August 14, 1999

On training camps in the Catskills:

“We teach young people to have a sane fist attached to a sane head, not to advocate this nebbish posture people seem to think is so popular.”

Reminds me of the IDF soldiers taking their oath in front of the Western Wall with a gun in one hand and a Bible in the other.  Remember when #obAMALEK belittled Americas who held on to their guns and Bibles?

“A lot of energy, and ideology classes will create an authentic Jew. A Jew who will know how to act when all Jews are in trouble.” The Times Herald-Record, June, 28, 1998

On Jewish extremists in the United States:

“Violence in self-defense is absolutely justifiable.”

And “JDL upholds the principle of Barzel — iron — the need to both move to help Jews everywhere and to change the Jewish image through sacrifice and all necessary means — even strength, force and violence. The Galut image of the Jew as a weakling, as one who is easily stepped upon and who does not fight back is an image that must be changed. Not only does that image cause immediate harm to Jews but it is a self-perpetuating thing. Because a Jew runs away or because a Jew allows himself to be stepped upon, he guarantees that another Jew in the future will be attacked because of the image that he has perpetuated. JDL wants to create a physically strong, fearless and courageous Jew who fights back. We are changing an image, an image born of 2,000 years in the Galut, an image that must be buried because it has buried us. We train ourselves for the defense of Jewish lives and Jewish rights. We learn how to fight physically, for it is better to know how and not have to, than have to and not know how.”

Notice how Jews are attacked for this stance but we watched the summer of love, 2020,  when BLM burned cities to the ground, destroyed businesses in the name of Black Lives Matter and the memory of George Floyd. No one was arrested. These people were revered. Respected.

I have a news flash for you. JEWISH LIVES MATTER and talk won’t save us. We have a right to be respected.