“The reality is, many people in this country simply to do not feel protected by the police, and in fact, they’re afraid of them. That alone would be bad enough, but systemic discrimination and racism in Canada goes much further than just policing,” Prime Minister Justin Trudeau 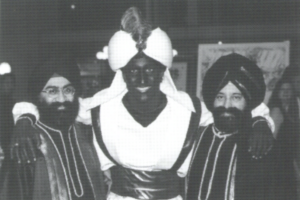 Racism has been defined as a developed set of attitudes that include antagonism based on the supposed superiority of one group or on the supposed inferiority of another group, premised solely on skin color or race. Some authors suggest that racism and White racism may be synonymous. Defining bigotry as a primarily White problem does disservice in two ways. It ignores the fact that racist attitudes can breed in any ethnic group.

The only systemically racist Canadian I know is Justin Trudeau, the Prime Minister, Mr. Blackface. The man who bent the knee in abject apology to Black Lives Matter because of events in America.  He bent the knee, but not for me. I will not take on the sins of this privileged white man trying to expiate his sin of Blackface, nor should the rest of Canada. 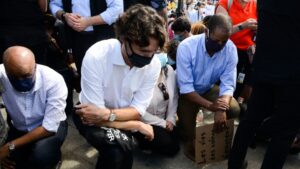 There is within each and every one of us an innate fear of the other that goes hand-in-hand with a desire to live. It has to do with our ancestors who looked out of the cave, saw something unfamiliar and shot first and asked questions later. It was the instinctual response to fear – fear that it may be a bear. Fear of losing one’s life.

It is the same innate fear that we see played out in babies – all babies, no matter their colour. We have all seen babies “make strange.” Suddenly they scream when they see someone new, different.  At some point in our development we learn who is in our pack. Us versus them. Tribal.

I suggest that racism is tribalism gone bad. Taking that innate fear of the other and feeding on it, promoting hate of the other until you raise a racist child.

We must learn not to fear the other. And that is taught in the Bible because we know what happens when we are taught to fear the other for no other reason than “looking” different. And we are taught in the West that all people are born with equal intrinsic value. It that true? I don’t know but that is the premise upon which we have created our society and that is what we must teach to our children in school and at home so that we naturally accept all people as part of our larger tribe.

So, is Canada systemically racist as our PM says?

Canada became a country in 1867. In 1803, Chief Justice William Osgoode placed on the law books the ruling that slavery was inconsistent with British law.  During slavery in America, Canada was the final destination of slaves fleeing the South via the Underground Railroad. We opened our borders and provided a safe harbour.  So how can Canada be systemically racist?

We’ve had our fair share of Canadians attacking black people, making life difficult for them, but these same Canadians had problems with other people, other tribes from Europe.

Our Dear Leader seems to be unaware of that racism. Will he bend the knee and apologize for this, too?

The Irish were often called Micks. In 1858 a Globe columnist described the Irish as “lazy, improvident and unthankful; they fill our poor houses and our prisons.”

In the 20th century there were signs that read “no Irish need apply.”

They were not the only ones attacked. Just about every new “tribe” faced some kind of discrimination. But not all rated special signage.

In the ‘30s and ‘40s some swimming pools in Toronto had signs “No Dogs or Jews Allowed.

In cottage country, and even on Toronto’s beaches up to the mid-1950s, it was common to see signs that read “No Dogs or Jews Allowed.” And, my favourite, “Gentiles only.”

Our Dear Leader seems unaware of the meaning of white privilege. Today’s “white privileged” people are not cut from the same cloth as Justin Trudeau, an uneducated man whose claim to fame is his father.

These white privileged people about whom we hear so much, the ones who are holding down people of colour, they came from Ireland and the Ukraine, fleeing poverty and starvation. The Irish  arrived during the first half of the 19th century. By the 1850’s, more than 500,000 Irish had immigrated to British North America, because the Great Famine of the late 1840’s drove 1.5 to 2 million destitute Irish out of Ireland. Ukrainian immigrants make up one of the largest groups to come to Canada. Poor and starving at home, the peasantry had been harassed and abused by Russian soldiers posted throughout the Ukraine and kept in a state of third-world poverty compounded by a drought and a famine.

They came with nothing but gratitude and worked hard while being ridiculed by those who arrived in Canada earlier. My father managed to get to Canada from Sossef, Russia or Poland, depending on the border that day, via Scotland and then on the Sicilian ship that brought him here in 1920, when he was 13 years old. Do you think he was privileged?

And speaking of not offending; it’s time our Prime Minister bent the knee, no, prostrated himself, to the Rest of Canada for pandering to Quebec and decimating the gas and oil industry in the West.

He needs to prostrate himself and beg forgiveness from all Canadians for prostituting himself to China. To buy a seat at the UN, a seat that only he seems to need.

Our Dear leader is repenting for racism. How about Jacism? How about repenting for the racism against Jews in this country? Remember World War II when Jews begged to be let in? Remember Mr. Prime Minster as it was a Liberal PM, William Lyon MacKenzie King who denied the Jews of the St Louis to enter Canada and instead watched as they were returned and incinerated in the crematoria.  The Liberals did not want to offend the French in Quebec.

And yet, here we are all worked up about anti-black racism as promoted by Black Lies Matter (BLM), the Israel-hating organization whose platform perpetrates antisemitic blood libels, including falsely condemning Israel as a “genocidal apartheid state.”  BLM and its platform promotes the antisemitic BDS movement, whose goal, acknowledged by its founders, is to destroy Israel.

And, here you are, still busy trying to put Israel under a bus-also a quid-pro quo. Once again you are prostituting yourself to gain access to the UN Security Council as if anyone in Canada really cared. But you do. Enough to stand with Iran and North Korea against Israel, the only democracy in the muck and misery of the Middle East and North Africa.  And now Canada’s foreign minister shared your stance and said if given the chance, he would pressure Israel to abandon its plan to annex parts of Judea and Samaria, reports the Palestinian Authority’s WAFA news outlet. During a telephone conversation Foreign Minister François-Philippe Champagne told PA Foreign Affairs chief Riyad Malki that if Canada joins the UN Security Council, it “will not remain silent” and will “speak out for peace and stability in the Middle East.”

We are always being told that white people are racist. Perhaps, but so are black people.  Blacks killing whites.

There is the Farm Attack phenomenon in South Africa.  The definition of a “Farm Attack” can vary but generally three criteria – 1) political incitement, 2) gratuitous torture (even of the elderly and children, and after victims have stopped resisting), and 3) public praise of the crimes – set the Farm Attacks apart from “social fabric” crimes. These are attacks against white people.

Concerned South Africans are trying to bring international attention to this matter; in May, one South African emailed the staff of South Carolina’s Senator Lindsey Graham:

“There is a white genocide going on… and we all have been living in fear and anticipation. Elderly are being raped, tortured and murdered… for something as petty as a phone. Our farmers are being slaughtered. We are denied jobs because of our skin colour.

[T]his is still “apartheid” just turned towards the white minority.”

Nelson Mandela must be rolling over in his grave.

So let’s put away this idea that racism is a one way street, shall we? And let’s demand of our PM that he care for all of us in Canada, equally, and stop pandering to the diverse groups which are dividing all of us into tribes.